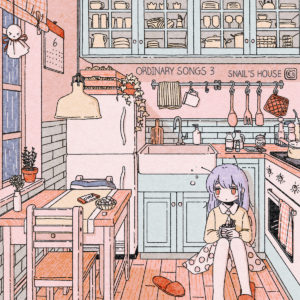 One of Snail’s House’s biggest skills on Ordinary Songs #3 is making intricacy sound so laid back. The five songs here unfurl at a mid-tempo bop, getting crowded at times (the springy “Bouquet” being a good example) but offering far more room to breathe than other contemporary producers in Japan. This is an album bound to be described as “chill” and which will see its songs land in a “peaceful beats for doing homework” playlist on YouTube. That isn’t wrong — Ordinary Songs #3 is really upbeat and calming — but it does blur how much is going on within to make it sound so peaceful. “Aloha” is full of blips, vocal samples and synth lines, but constructed in such a way to feel sparser than it actually is. “Bouquet” reminds of Snail’s House secret weapon — his use of piano as central moving force, while nearly every song here displays his clever approach to melody (the only misfire being the carnival yawn of “Lullaby,” the one song that almost makes you want to utter the words “kawaii bass thinkpiece brewing”). Get it here, or listen below.