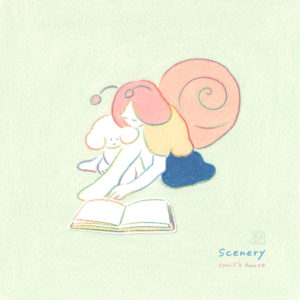 After the interstellar get-down of Alien Pop II, Scenery gives Snail’s House a chance to catch their breathe and return to carefully constructed pieces that reveal themselves slowly but surely. This album comes much closer to last year’s intricate L’été, a series of numbers coming close to fading into the background but have been put together in a way to change and intrigue as they reveal themselves. It bubbles up in the 8-bit hop of “Itsumo No Michi” and it sneaks up in the back of the particularly aching “Stray Cat,” which uses field recordings to place the music (while also busting out…like, doors opening and closing as percussion, which is a nice tactile touch).

The bulk of Scenery plays out like AP beats to study/chill too, offering music that works as background but reveals a lot of depth when given more attention. But the best moments come when Snail’s House snaps you out of the easy-going vibes using vocals. “Floret” jars the listener out of a loop via a manipulated loop of a voice saying “there is no past / there is no future,” taking the easy-to-zone-out quality of the music and smuggling in some life koans into it to get you thinking (or dreading). “Medicine” uses them more as additional texture, but the warm sound of a human voice drifting over the beeps and notes lends this an emotional touch sometimes more subtle. It’s still relaxing, but a reminder that Snail’s House is still mixing it up. Get it here, or listen below.