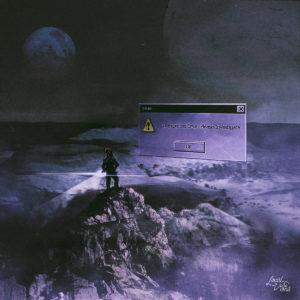 A common failing of online musical movements is a lack of evolution. Nobody has to find new angles on a burgeoning sound, but at some point you end up with a lot of people slowing down or speeding up the same basic thing. That’s one of the reasons Local Visions has been such a welcome addition to the online label-sphere of Japan. The acts they’ve highlighted thus far take from the sonic and visual elements of vaporwave, retrowave, future funk…the list goes on…but no release so far has simply settled. Rather, the artists build on that as a foundation, and the result is some of the year’s most interesting (and fun!) music.

The latest from Local Visions comes from Toxxies member SNJO. Mikai No Wakusei again dips into the ever-expanding world of Web-born styles as a source of inspiration, something evident from the synth churn of opener “Portal.” Yet soon enough SNJO’s own digitally modified voice creeps in, floating over an electronic strut on the title track and zig-zagging around the ripples and sample barrages of “Spaceman.” Rappers and guest vocalists sneak into this zero-gravity party, and everything goes acid on the high-energy “Quartz.” By the end of this album, I wasn’t even sure if my original hypothesis really fit, but every subsequent listen reminds that, nope, SNJO is simply building on top of it and edging it in different ways. Get it here, or listen below.