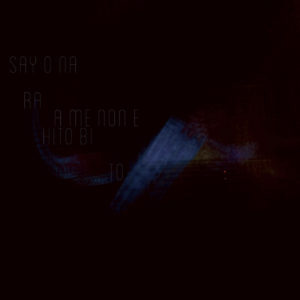 The music Smany has been making over the years already relied on a certain amount of delicateness. Like Flau artists Cokiyu or Cuushe, or someone like Nariaki Obukuro, she has used silence as the perfect way to twist the emotions central to her work. But before she worked fully with electronic sounds of her own creation. Yet for this release, she has collaborated with a string section called Nyan-Nyan Orchestra for two songs that really ramp up the drama of her music. “Sayonara Hitobito” opens with some spoken word before SMany’s synth-generated notes wrap around violin playing Then she sings over both, and what follows almost gets too over the top…but all parties flash restraint, which just makes for great tension. That carries over to the nature-sampling “Amenone,” which proves to be more uptempo and even busier. Yet it ultimately feels like a space Smany can occupy well. Get it here, or listen below.