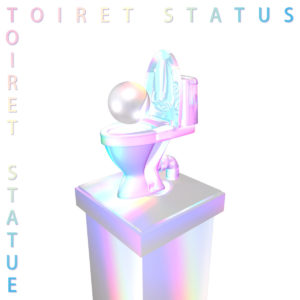 This is the first Toiret Status release that doesn’t overwhelm, but benefits from a close listening. This hasn’t been the case before, and that was a pretty great thing in regards to Omaru or Nyoi Plunger, albums that felt like dozens of different sounds criss-crossing like broken TV signals into a pattern that made something inviting. Toilet Statue doesn’t quite reach those heights, partially because of a slight fatigue (it wasn’t that far off since we had their last album!) but more so because the best moments here find Toiret Status exploring the space within their music. Several numbers here approach the structure — though definitely not texture — of rap beats, from the ice-cream-truck lurch of “#55” to the piano-accented bounce of “#56.” Many of the songs give themselves more space to breathe or develop slower, resulting in some stunning moments (the mini-epic “#58,” curveball closer “#0.02” with its delicate keyboard playing and satisfying final flush) but also a handful of meandering cuts. That shouldn’t be a word deployed for an artist so unpredictable as this one, but Statue comes off as a n artist exploring their approach and seeing what they can do with it, even if it doesn’t all hit. Get it here, or listen below.