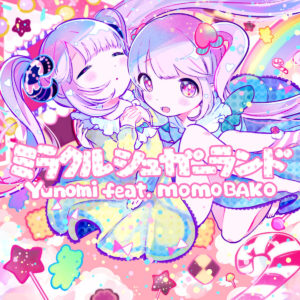 Plenty of people have come around to producer Yunomi’s maximalist mix of gumball-bright synthesizers and traditional touches, and 2018 has already proven pretty busy. The most notable project he’s undertaken was more or less architecting the debut album from future-bass idols Cy8er, seeing him add in a few more dramatic touches (alongside big dumb drops). Now comes a new song featuring artist Momobako that is a bit more of a traditional Yunomi number. “Miracle Sugar Land” was written for a forthcoming art book, and features one of the more understated verses Yunomi has done, putting the focus on Momobako’s higher-pitched voice (sorry SoundCloud, she doesn’t say Gucci Gang). The hook, though, is a bit more physical, though still avoids going full mosh pit in favor of something a bit sweeter. Get it here, or listen below.