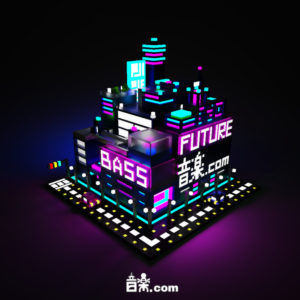 Everyday at 10 a.m., I fired up the HQ app and attempt to finally win about $11 by guessing on questions about the periodic table. Before it gets underway, they play this theme song that is the trivia-app equivalent of a Wave Racer song. It’s a daily reminder of the weird space future bass occupies in 2018. Plenty of great tracks tagged with this still come out, but I’m as equally inundated by janky attempts at future bass found in YouTube videos made by influencers. All music is pretty much mood backing in the Spotify age, but I think future bass in particular has become a go-to for background music, offering videos and other “content” easy cool that doesn’t get in the way of the main point. Which is weird, because one of the reasons I’m personally drawn to this music is how tactile and attention-demanding it is, not because it sounds pleasant while someone buys a grain bowl in downtown LA.

Netlabel Ongaku.com’s FutureBassCompilation boasts a tossed off title, and listening to it over the last few days I’m sometimes struck by a dread that maybe it was designed as a way to land in a YouTube video or picked up by a fledgling start-up’s app. Yet enough moments across it remind of the energy central to this style that made it so absorbing in the first place. Check Super Shrimp’s delirious “Penny Candy,” which turns sampled syllables into a sugar rush, a tired-but-true method that can still get bodies moving. Or dive into Emeru’s “Bothynus,” which basically does a better job of Yasutaka-Nakata-does-future-bass than Nakata himself. Like all great comps, it is most fun to just jump in and find your favorites, and the variety on display goes a long way to making that pay off (dramatic start-stop stuff? Yokochy’s “Rain Is Letting Up.” Chipmunked madness? K-Next’s “Remap.”). A nice reminder of how great this can be when it is right up front. Get it here, or listen below.