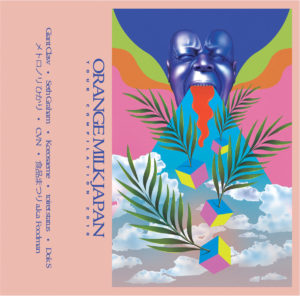 America’s Orange Milk recently wrapped up a tour of Japan and, despite a few setbacks — mainly, the lack of Giant Claw — they put on a great set of experimental loopiness (well, at least at the Tokyo leg at WWW I attended). As they are central to the label as a whole, the performances gave plenty of space to Japanese artists. Orange Milk Japan Tour Compilation, fittingly, does the same. It leads off with numbers from co-founders Keith Rankin (Giant Claw) and Seth Graham, and the highlights producers such as CVN (delivering a melancholy rumbler dotted with vocal samples pitched down to be near unrecognizable) and Metoronori (“The Ivy Acrobat” offering one of the more playful tunes she’s done recently, guided by a crystalline synth melody under which she sing-whispers). It gets a bit wild — Toiret Status’ “#69” flies off the rails in the best way, offering the most cacophonous version of their sound yet — but ends on a solid note via Foodman’s “Toki No Tabibito,” a sweltering groove that finds all the unsettling elements pushed to the corner in favor of something to move to. Get it here, or listen below.