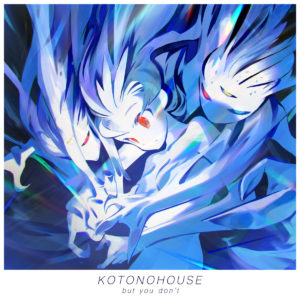 Holding just enough back can go a long way. Producer Kotonohouse certainly brings plenty of energy across their new EP But You Don’t, using slivers of vocal samples and quick changes in tempo to create a mood that practically forces you to move just to keep up. But what makes the four song set stick around longer is how Kotonohouse tries to keep a little in the tank, giving these creations a little extra space to breathe. Opener “Wake Up” matches its fine-sliced syllables up with piano notes, before seemingly building the song up for a big plunge down into chaos — but what emerges is actually more space for the beat to speed up, playing out like a more caffeinated Cashmere Cat. The title track warps voices to the extreme, but places them over placid sounds that cover the song even as the beat revs up, and even the drop opts for space over suffocation (though the metallic “fuck it” and gun cocking sounds make for plenty of tension). Even the biggest rave out, “Phantasma,” sounds like comforting zero-g party than something truly wild. But the extra space goes a long, long way. Get it here, or listen below.