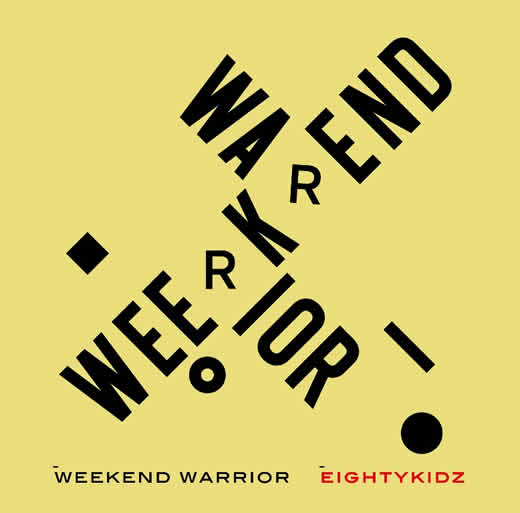 80kidz have issues with timing. If the one secret to obtaining blog hype is making sure your artistic outfit exists at just the right moment, the Tokyo duo managed to just miss out on being way bigger than they ended up. Justice exploded in 2007, grabbing mad popularity and critical praise which led to an explosion in “blog house” music leading to a monopoly on the Hype Machine and countless riffing by Hipster Runoff. 80kidzs’ first EP didn’t drop until late 2008, and they (“they” being a trio back then) released a full-length in 2009 well after the micro-genre they definitely fell into started fading into the background. Though that debut This Is My Shit was far from a great album…way too long and full of same-sounding “loud” dance tracks…it did feature some impressive examples of “blog house” and some forward-thinking, softer tracks anchored by guest vocals provided by similar also-rans Hey Champ and The Shoes. I think if Shit came out in 2008 80kidz would have seen some exposure beyond really dedicated electro-dance blogs.

Jump forward to late 2010. Chillwave has clearly dethroned “blog house” as the indie-approved buzz music of the moment/Hipster Runoff punchline. Justice have been silent. Uffie…well let’s not even start with Uffie. And 80kidz sophomore album Weekend Warrior comes out into a world where the type of fuzzed-out noise they once hoped to be caught up in has become just another textbook paragraph. Before even listening to this album, I wondered how these two could continue making music that, quite frankly, wore out its welcome a very long time ago. I wasn’t just assuming – 80kidz released two EPs and several songs earlier in the year like “Spoiledboy” which featured another quickly-being-forgotten buzz band CSS’ lead singer lending vocals. Not to mention the scary lack of “featuring” spots on the tracklisting, as those songs on Shit stood out as the strongest by a mile. I feared Weekend Warrior would be the equivalent of Weber-Grill-like stomach sporting 40-year-old men trying to relive their college glory days, clinging to ideas best left in the past. Though for 80kidz, that past was only a year ago.

All my caution seemed doomed to become true after Weekend Warrior’s first two tracks wrapped up. Opener “Nautilas” rushes out the gate with all the loud swagger of 2007, running headfirst into the present. Which is to say – it’s a very ho-hum bit of “blog house” that you’ll either embrace for being right up your alley or rejecting for being sorta obnoxious. I fall into the latter – “Nautilas” shows very little depth, sprinting between “loud” and “louder” all the while hoping pure volume makes up for a lack of ideas. The next song, a reworking of the already-released song “Voice,” should probably go down as 80kidzs’ “Robot Rock” what with its guitar-like crunch and robotized voices. And just like the Daft Punk track, this “Voice” sounds totally Recycle-Bin ready. Their sophomore album opens with two songs that almost sum up everything bad about the “blog house” times – they hardly seemed labored over, nondescript “buzzy” dance tracks waiting to be cued up by a DJ at a trendy club night. 80kidz seem to be throwing a party two years too late, and not noticing how nobody came.

Then comes “Red Star,” and it’s like 80kidz finally see nobody at their shindig, deciding to clean up and rearrange the room while they are at it. At this point, Weekend Warrior goes from sure dud to one of 2010’s strongest electronic albums.

Not to say “Red Star” signifies some big jump forward for 80kidz or electronic music in general. In fact, the song still contains traces of the duo’s loud sound and mostly just does away with some of the clutter. Yet what “Red Star” really highlights is a new-found sense of construction and feeling. “Nautilas” and “Voice” sound like songs desperate to stand out, made for the purpose of getting a blog mention…”Red Star” sounds like just a slightly downtrodden dance jam hinting at something more personal, and thank god for that. Most of the praise goes to the keyboard work, which sounds like two siren-like lines coming together at just the right time to give this song a subtle kick, while also knowing to turn the knob towards “really quiet” can’t hurt sometimes. Follow-up number “Prisma” trudges down similarly mellow lanes, moving a pace behind “Red Star” but still equipped with a foot-pushing beat. These two tracks manage to pull off the same sonic feel as all those “featuring” tracks on Shit did but without 80kidz having to rely on someone else to make them good. These two tracks show us a duo finding confidence.

The middle portion of this LP jumps between livelier portions like the ADHD-riddled (in a good way) “Flow With It” and the trill “Agenda” which comes complete with Speak ‘n’ Spell vocals, to more introspective jams in the vein of “Red Star” such as “Czerny 13” and the creepy muffled-sample-ful “I Wish.” Shit lagged frequently, but Weekend Warrior’s middle powers through and rarely sags. Even “Weak Point,” critic bait with a title like that, impresses with some of the wonkiest production 80kidz have displayed yet in their young career. It all leads to the next big breakthrough “Private Beats,” where the Kidz shake off the shackles of “blog house” to embrace a no-gimmicks dance sound. It’s a very glossy production, never giving into ugly sound and even letting the simple vocals samples (“shift,” “control”) go unsludged.

Weekend Warrior’s back-stretch starts to tire a little…at just under an hour, this album still goes on a little long, but at least doesn’t feel like a Texas road trip like Shit could…as 80kidz bank solely on the sad-eyed electronics they wheeled out to great applause earlier. Nothings particularly bad – and the bright-diamond of a song “When You See” hints at an 80kidz capable of producing legitimate J-Pop – just a little tiring without some fun party tracks there to serve as intermission. The album ends triumphantly, though, with the title track, a cut-and-paste rager in the style of protégé Baroque’s “Feel So Good.” Which is – heavy but fun as tapping a keg.

The assumptions you bring to this album most likely will dictate how you feel about it. If you love that Justice-lite sound, you’ll probably be let down. I went into listening to Weekend Warrior expecting disappointment – a shameful critic am I – and instead left being mighty impressed though listening to this album a lot…along with soldiering through Shit once again… has convinced me this isn’t a case of lowered expectations but the doings of a legitimately good album. 80kidz still haven’t gotten the timing down as this album will only generate any buzz in Japan. But they now can lay claim to having made a solid album, something a timeline can’t hide forever.