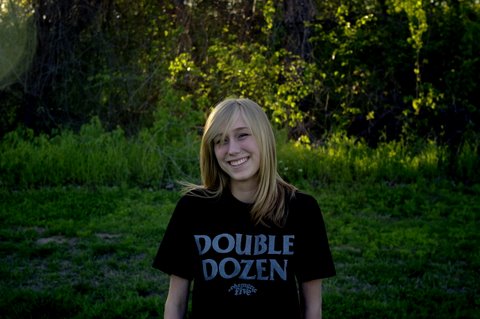 On “Say What?,” the sixth track on Cubismo Grafico Five’s new album Double Dozen, the band seemingly stumble into a song doubling as an appropriate description of their music. “Are you garage band?/Are you trash band?” lead Cubismo man Gakuji Matsuda shouts at some unknown entity. “Are you really punk?/Are you hard core?/Are you electro?” These questions could easily be turned the other way and asked about his outfit – CG5 avoid falling under any one genre umbrella, on album jumping from synth-laced rock on one track to reggae the next to who knows what on the following number. They don’t even bother waiting that long live, making multiple genre-jumps in a single song. CG5 almost exist to mock the very idea of categorizing music…”holla what do you do?” someone yells out on “Say What?” “What the fuck/say what?” the band responds appropriately.

So it comes as no surprise that Double Dozen catches Cubismo Grafico Five once again spazzing out all over the place. Unlike previous albums, though, this go around finds the group simultaneously capturing the dizzying feel of their live show and being the most ambitious thing they’ve ever made. At a promised-and-guaranteed 24 songs in a scant 40 minutes, Double Dozen rockets by (the longest track lasts a whole two minutes and 41 seconds) and features enough forays into different musical styles to fill a disc twice its length. Miraculously, Cubismo and crew handle such an undertaking like pros and never let things turn into a trainwreck such a project could have ended up, instead delivering a furiously fun 40 minutes and an instant highpoint in the group’s discography.

Whereas previous CG5 LPs sorta hovered around themes like “reggae” and “electronic sounding,” Double Dozen is mostly a guitar-friendly rock album, a fact made clear on opener “New Decade.” After a relatively laid back fake-out into, the band pummels through the album’s most aggressive number, a clear attempt at hardcore madness. Though, in typical fashion, even this lapses momentarily into a ska-sounding moment. The album dips its toes into all sorts of mutations of rock, ranging from more mosh numbers (“Personal Computer,” “Say What?”) to bouncy power pop (“The Catcher In The Riot”) to psych (the aptly named “Woodstock”). Of course, being a Cubismo album, plenty of detours come along – the circus-rock of “Couple Of Weeks” drifts into lazy reggae, “Super Duper Cool” may very well be the closest the band ever come to trip-hop and, best of all, the climatic “Chukit” tackles “We Are The World” type group sing-a-long with surprisingly emotional results. This album includes an entire song serving as an omnichord solo…that should speak for itself.

Yet the most interesting rock sound on Double Dozen comes from an unlikely but timely source…90s pop-punk. The same month Wavves forced every rock critic to revisit Dude Ranch, Cubismo Grafico Five went and made an album much more indebted to these groups. A large chunk of this album’s songs are rockin-but-catchy numbers, running quickly enough as to not overstay their welcome. “Frozen Time,” “Couple Of Weeks,” “Stick By You,” “Aoi Kagi,” the list goes on. Heck, the jumpy, Riddim Saunter-shout-out “Can’s Can Badge” basically recreates an early Green Day single in all its catchy glory. Tough to call anything they do “unexpected,” but CG5 definitely surprise at how well they’ve got this down.

If Double Dozen comes off as a series of short sketches thus far, don’t worry because the very best songs here are fleshed out creations. Lead single “Life Is Like A Season” stabs at infectious surf rock complete with huge everyone-with-me choruses. The punky “Green Monster” stands out not only as one of the more complex tracks here (a twisty number going from heads-forward to reflective back to aggressive) but also one of the most compelling – Cubismo Grafico Five’s always been hit or miss when it comes to lyrics, but “Green Monster” manages to capture the toxic-ness of jealousy with a clever (if slightly un-subtle) metaphor. Best of all is “Left Right Up Down,” a keyboard-heavy neck mover. Simultaneously capturing the precise nature of math rock and the wilds of punk, “Left Right Up Down” hovers excellently between organized and chaotic (check those random shouts!) and in an album full of great small blasts, stands out as being very well thought out.

For a band constantly blurring musical lines, CG5’s latest comes off as a huge achievement in terms of being all over the place but consistently great. Despite being twice as long as most previous efforts, Double Dozen gels together better than anything else by the group and is also the album where the “Five” end up being absolutely vital to Cubismo Grafico’s plans. In a just world, this LP would manage to get caught up in the current hurricane of 90’s punk fascination and get some exposure. I didn’t even touch on the fact this album could also serve to crown CG5 as the new Mae Shi. Yet it would also be strangely appropriate if Double Dozen escaped the tentacles of such fad genres. After all, to quote the band, “what the fuck?”