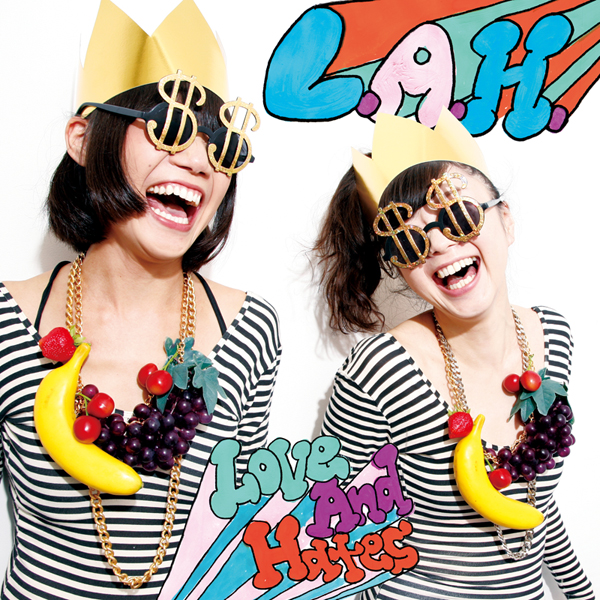 L.A.H. does something few Japanese albums can – divide. Folks who follow the Japanese music scene – especially the indie community, to which Love And Hates members Yuppa (of HNC) and Moe (of Miila And The Geeks) certainly belong – rarely get riled up about anything. People have differing opinions sure, and it isn’t like everyone laps up whatever sonic water dish gets placed in front of them, but rarely does something inspire real critical venom (ignoring obvious J-Pop targets – hating AKB48 or Arashi are certainly justifiable, but also as predictable as hating Nickelback).

Love And Hates though…these two can fire people up. Coke Machine Glow’s Mark Abraham gave them the “Extra Special Yeah Award For The Best Hip-Hop-Ish Album Of The Year” and placed L.A.H. in his personal top ten list, going as far as to compare them to the “most commercial parts of OOIOO” which isn’t faint praise. Yet I also know people…names withheld…who hate this album and everything Love And Hates do. This isn’t a simple “not my thing, sorry dude” but rather a reaction like this album is an affront to music. Abraham also notes how he thinks his “colleagues would have laughed at it and then laughed at me” and then questioned whether it was hip-hop or “a fucking joke.” Hell, this thing came out more than two months ago but the stuff going on in this record deserve some sort of write-up.

Thing is, this album doesn’t seek to stir anything up (though, it sort of does at the same time, maybe unknowingly). It’s the side project from two of the smartest minds in Japanese indie music at the moment, one of them responsible for one of the most hairs-raised-on-skin songs of 2011 (HNC’s “I Dream I Dead”) and our favorite album of the past year (Miila And The Geek’s New Age. Here, they put on Burger King crowns and dig out kazoos from their toy chests to make something I’ve seen described as “twee crunk.” For them, it is probably a fun diversion from the grimmer material pumped out by their main projects as of late, a chance to make silly songs and pretend to be hip-hop superstars.

Hip-hop. Those two syllables hit on why I think people loathe…or are at least skittish…around Love And Hates. Just reread some of the ways I described these two – “twee crunk,” kazoos, goofy outfits. Sounds like joke rap, right? And very few things in the world are worse than fucking joke rap. Have you ever listened to Goldie Lookin Chain? Don’t. Love And Hates frequently sound on the verge of cuing up Keyboard Cat and revealing this project to be a gag, the majority of L.A.H. finding the two “rapping” over beats choking with twee signposts. On the track “Party Trash,” they kick off the tune with a chopped-n-screwed vocal declaring “WE LOVE ICE CREAM VERY MUCH.” To be totally honest, I understand why someone would be suspicious of all this.

I don’t think it’s a punchline, though. What makes most joke rap infuriating is the implication that rap as a whole is a joke, that it’s all “thugs” and “hoes” and “bling” and other buzzwords the Parent’s Television Council probably throw around. Joke rap paints hip-hop as not being “serious” music, which is why acoustic covers of songs like “Bitches Ain’t Shit” sound so irritating – not only is it a big ironic “ha ha, look what I am doing here,” it also hints at rap being inauthentic because…there aren’t real instruments? This sort of music can fuck right off.

Love And Hates aren’t poking fun at hip-hop though. If anything, L.A.H. sounds like an album that respects rap music, its creators wanting to give it a shot the way they know how. It reminds me of how other elements of Western culture sometimes get remade to an extreme in Japan – see the McDonald’s Japan menu, or KFC for Christmas. Only one track on this LP comes close to being joke rap – “Money,” which is about the titular subject and veers a little too close to Larry The Cable Guy jab, and ends up the worst number here because of it. Everything else, though, sounds like a rap sandbox. The chopped-n-screwed intro of “Party Trash” just a cool vocal delivery to Love And Hates, the “London Bridge Is Falling Down” portion of the title track a bit of fun no worse than, say, Jibbs. The same goes for “Eeny Meeny” and the jump-rope chant of “Wooper Looper.” Love And Hates aren’t laughing at hip-hop, they are laughing with it by interpreting the sound of hip-hop through Love And Hates.

And they interpret it as a good time. L.A.H. is above all else a really fun record, one that’s tempting to dissect in order to find a nice, gooey thinkpiece but really just wants you to get stupid for a little bit. For God’s sakes, Love And Hates recruit Hideki Kaji to play this guy in their indie-pop cover of The Muppet Show classic “Mahna Mahna.” It’s silly yeah and nowhere approaching Ghostface territory. But rap is full of silly characters and songs. What Love And Hates do really isn’t that ridiculous, and hardly a mockery of rap.

(Quick aside that couldn’t really fit anywhere else – “The Drum” is just a great slice of tropical pop, and almost feels out of place here. Best song on the album, but also the most out of place.)

It’s strange that L.A.H. seems to push people’s buttons, because this is an album that is pretty upfront about it being a fun escape. I wouldn’t go as far to say they resemble OOIOO in anyway, but Love And Hates’ debut release is a fun little collection of songs that are certainly goofy, but endearingly so. Really, more artists in Japan need to be like Love And Hates – unafraid to try something that on paper seems ridiculous and bound for ridicule, but somehow works in the end.