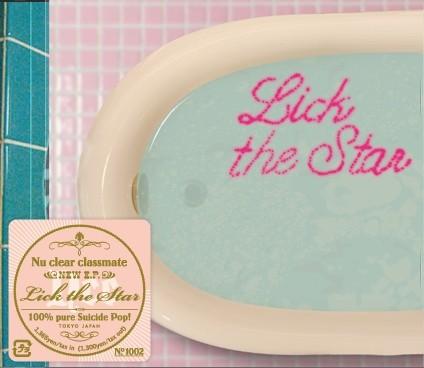 Not to pile on M.I.A. anymore than every website in the universe already has, but Nu Clear Classmate have managed to best her when it comes to taking cues from Suicide. The truffle-fry-havin’ pop star’s song “Born Free” – which you might have missed since the only thing anyone talked about was that dumb video – featured a sample of Suicide’s “Ghost Rider” smack dab in the center. Though she earned props from anyone who felt connected to the narrator of LCD Soundsystem’s “Losing My Edge,” she also betrayed the one element of her music that made the masses put up with her at-times obnoxious political side…the song’s not catchy. Her vocals don’t mesh at all with (purposely) grating music, and it lacks an absolutely bonkers chorus to make up for it. Great cred grabber, but nothing else.

Instead of sampling Suicide, Tokyo duo Nu Clear Classmate combine that two-piece’s unnerving sound with more straightforward structure. They call it “suicide pop” and they really couldn’t have conjured up a better description for the music on Lick The Star, beyond just acknowledging what James Murphy-approved bands they listen to. “Causeless Pain” works as the suicide pop anthem of choice – a buzzy guitar wave blankets the song from the start, sounds as ominous as boss battle music from a Nintendo game. It almost seems comically grim until the low-key singing comes in and tries its hardest to lift itself up, to add any color to a song doused in ink. “Where did we make a mistake?/what went wrong?/But I knew we’d not last forever/So why do I cry?” lead singer chick (that’s all the album notes give ya) musters while guitarist Zak continues piling on with that noise. Like the entirety of the album, “Causeless Pain” feels vaguely uncomfortable…but also so catchy you don’t want to get away from the onslaught.

Not to label Lick The Star as you’re go-to soundtrack while watching the Gulf Coast oil spill cam. Only the pulsing “The Nearest Faraway” approaches “Causeless Pain’s” outright desperation thanks to the creepily worn out singing. The rest of this short album (18 minutes) finds Nu Clear Classmate using the heavy guitar spread for happiness not depression. The band make the guitar sound a bit perkier on opener “Blank World,” coupling it with a marching beat and chick’s giddy lyrics about the realization that death is certain (“There isn’t needed much money or pride/They’re nothing/it’s just junk” before later declaring that she just “wanna be with you till the last”). It’s the album’s last two tracks, though, that shine brightest. “I Know I Know” opens with synths sounding familiar to the intro to MGMT’s “Time To Pretend,” but instead of daydreaming Nu Clear Classmate focus on realistic problems. “I’m going to be crazy/Loneliness drive me crazy” chick opens up with before slowly seeking out hope during the rest of the song, reaching dizzying heights on the chorus, Lick The Star’s pop highlight. Album closer “I Leave The Parade Wearing A Dress” relies just as much on dreamy electronics as guitars, chick singing about wanting to dance all night and managing to drop the line “hugs not drugs” in without torpedoing the whole song. It’s the last lines of the album that sums it up though, “suicide pop is solution/simple songs.” And that’s, despite the menacing guitar ripping through it, what Nu Clear Classmate make…catchy, simple songs. M.I.A. take note.