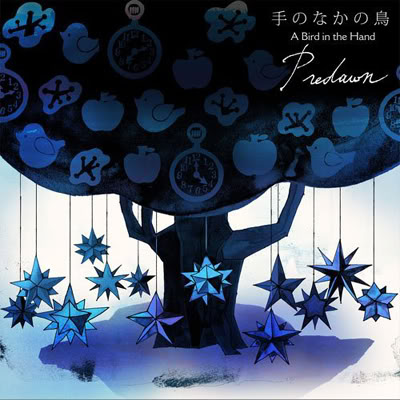 Listening to Predawn’s A Bird In The Hand feels similar to reading someone’s diary, except this particular diary doesn’t concern itself with recounting the day or offering a safe zone to discuss crushes. No, it instead focuses on the tiniest details found in profound moments – the movement of a forefinger during a farewell, the way a lover looks into your eyes at 4 A.M., the croaking of a frog heard by an insomniac. If anything, Predawn jots down small sketches of the mundane that hide a lot more emotion than they initially seem. A Bird In The Hand fits a lot of these observations into its short run time, and is an especially strong recording because of it.

It helps that Predawn (aka Tokyo artist Miwako Shimizu) pushes the lyrics to the forefront by keeping the music relatively simple. Most of the songs on Bird feature nothing more than her clear-as-water voice (which, let’s get this out of the way, sounds like the lead singer of Six Pence None The Richer) and acoustic guitar, only allowing tiny extravagances like muffled sleigh bells as percussion. It’s telling that the weakest song here, “Custard Pie,” piles on piano, slight drums and trumpet. They drown out Predawn’s best quality, her ability to craft super sparse snapshots of tiny details only the keenest authors usually catch.

The one-two punch of “What Does It Mean?” and “Suddenly” finds Predawn using her signature sparse sound to tackle both ends of the emotional spectrum. In the prior, she describes the moment a relationship comes to an end…or, more accurately, the seconds in which it ends. Shimizu focuses not on the emotional but rather physical movements (of eyes, of fingers, of lips) happening during this breakup, a move separating this song from countless other coffeehouse-veering tracks. “Suddenly,” meanwhile, sees love blooming all at once, set over the album’s most country-tinged playing and Predawn giving her best vocal performance on Bird, a restrained singing oozing happiness.

None of Bird’s other tracks match the spare beauty of those two, but do come close. “Lullaby From Street Lights” features the fewest instruments and is also the one moment Predawn gets a bit too close to open mic night. She saves it though thanks to all the space surrounding her words, which lends an air of loneliness to the proceedings. “Apple Tree” is a late highlight, a slowly unfolding haze of guitars backing up Shimizu’s cheery singing. Here, she’s at her most mundane but sorta profound…she sings about simply talking with someone underneath an apple tree about “tidy pop rock tunes and techno love songs.”

Bird wisely cashes out after 20 minutes, preventing Predawn’s latest from burning out. Despite how fast this album breezes by, it demands repeat listens thanks to its prettiness and lyrics. Some albums demand your attention and seek to be something monumental – Predawn just wants to be part of your ho-hum day.