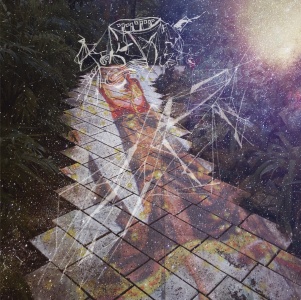 The mini-album may not be as strange as Japanroos, but it’s still a weird format for a record. A little longer than an EP but apparently not enough minutes to be an album, the mini-album has become the go-to format for many indie bands in Japan. Though it sometimes seems like a band releasing a mini-album is sorta a cop out, it’s the perfect length for Osaka’s Your Gold, My Pink. Their frantic, whooping rock songs never wear out their welcome on a 25-minute-long CD. Pray, their second mini-album in just as many years, offers up some of the young quartet’s best material yet and in a package that knows how not to burn itself out.

Your Gold, My Pink have always been energetic in their young career so far, but Pray finds them making huge leaps when it comes to actually writing songs around that jubilation. A track like Pray’s “Star Fall” features all sort of group shouts, backing yelps and goofy sing-a-longs, but the group weaves them into the actual song. It’s a problem many other bands mimicking this style…which, to some degree, means “trying to be the Japanese Los Campesinos!”…run into. Just ask The Chef Cooks Me. Yet Pray shows Your Gold have gotten a hold of this, a big development for them as a band.

The mini-album also shows they’ve just flat-out gotten better at constructing songs. The roomwrecker here is “Adolescence,” featuring a Strokes-ey guitar running through its three-minute playtime. Yet Your Gold drop any worries about being cool and put their personal touches all around the track. Expect faint xylophone, background shouts and an unhinged chorus. Elsewhere, “Twinkle Steps” finds Your Gold trying to be a bit more dramatic, breaking out Morse Code beeps and dramatic synth sweeps to make the band’s most star-focused song. Even as they add on guitar and drums, they only really let loose on the chorus. Awkwardly titled jam “Jelly Beans Are Dancing, We Are Starting Over” stuffs assorted samples into the albums most aggressive number, all guitars barreling ahead in under two minutes.

The short running time of this mini-album goes a long way to making Pray seem nearly perfect. They successfully tackle bouncy cowbell-driven rock (“Froth On The Daydream”), downtrodden sing-a-longs (“Demon’s Hole”) and soaring climaxes (album closer “Twilight, Twilight”). Save for the meandering dramatics of “Sail Moon,” Pray offers up Your Gold’s strongest songs yet, making it both one of 2010’s stronger mini-albums and a glowing piece of hype for the group. It makes one excited for what the band might do next…hopefully, another mini-album.

Your Gold, My Pink’s MySpace