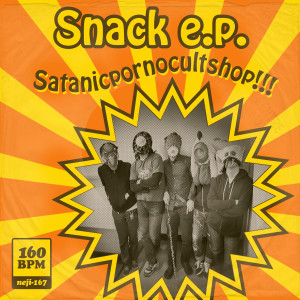 Long-running Osaka outfit Satanicpornocultshop’s latest release, the Snack EP, features a strict unifying sonic theme — the group samples African funk tracks from the 1970s and turns them into wobbly juke numbers. The source material — warm, guitar-centered music — gives Snack an overall brighter atmosphere than many of the outfit’s previous juke releases (and most Japanese juke songs…considering how many are about the horrors of nuclear energy…). Though the stutter effect of juke still makes for plenty of unsettling moments, highlighted early by the repetition of the titular name on “Jerome,” a detail that should be totally banal but becomes creepy as the song plays out. Snack brings to mind Los Angeles producer Madlib’s Beat Konducta series, in particular the second installment wherein he sampled only ’70s Indian music. It made for great beats, and it helped shine lot on songs from a place often ignored in discussions about music. Get it here, or listen below.