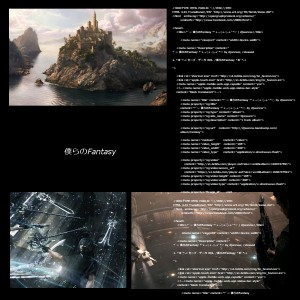 The short version: Well, this is fucked up in a really fun way.

The long version: Wasabi Tapes is a new venture launched by the guy behind the Japanese music blog (and, if you can navigate the language, a blog Make Believe Melodies strongly recommends adding to your bookmarks) Hi-Hi Whoopee. The label deals in Japanese experimental music…and the first release courtesy of DJWWWW & MC PLAY-STATION (half of which is also the head of the imprint/blog) is a doozy. This one isn’t being highlighted because it’s melodic or catchy or even remotely in order – really, the pure chaotic collage structure of this album (yeah, like I’m pasting that title here again) is the draw. It’s an absolute jumble of modern-day samples, the whole thing playing out like seven satellite radio stations smashing into one another at any given time. Whereas a micro-genre like vaporwave derives much of its sound from the past, this project hurls Waka Flaka Flame, Gang Gang Dance and Final Fantasy (the video game). The whiplash of the whole album, though, becomes captivating…you never know what’s going to emerge from the digital ether next. Get it here, or listen below.