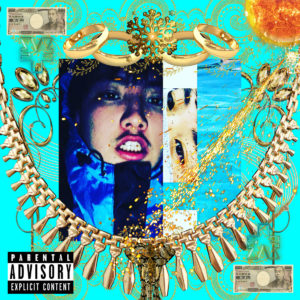 The most intriguing development in Japanese music in 2016 was a new wave of experimental music celebrating noise (and noises) over meaning. And it still feels just as exciting a movement in 2017, with Wasabi Tapes leading the charge. PF’s PF$$$$$$$$$$$$$$$$$ is the latest album to create beauty out of cacophony, and offers one of the lusher images of this style to date. The vivid texture and HD quality of sounds remains, but for the most part PF puts them into a softer, almost reverent context…or at least as much as one can given the whirlwind of samples slamming against one another. Take a track such as “Water Fairies,” crammed up with vocal samples and little quick details. Yet it always maintains a crystaline vibe, the melody rippling off peacefully throughout. All of the album is full of these moments — of woodwinds threading together cartoon blasts, or reimagining the sound of Yoshi (a sound both played out in future bass, and which a lot of experimental songs as of late have indirectly sounded like) into something oddly peaceful. For those seeking a little beauty in a media saturated world, Wasabi Tapes always has you covered. Get it here, or listen below.