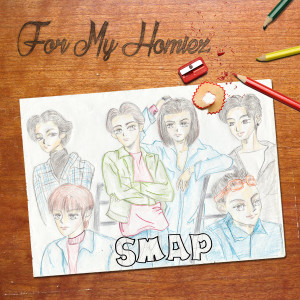 The line between stupidity and genius can often be very close, and lord does For My Homiez jump-rope between the two. This is an album of songs mostly constructed from samples of SMAP songs, with some tracks warping Johnny’s favorite cash cow into goofy trap numbers over which people rap about…SMAP, and Johnny Kitagawa. As the title and description (“tribute to S.M.A.P. MOB”) hint at, it sometimes feels like it is veering into rap parody, the most dreaded of waters. Just look at the teaser video for this thing!

Yet, in the same way that Toyomu’s Imagining “The Life Of Pablo“ captures the weird digital state of feast/famine in 2016, Homiez rises above all its trappings because the things it explores are far more ridiculous than anything the people behind this could come up with. This is an album devoted to SMAP, arguably Japan’s most successful music group ever and almost certainly the catalyst for every horrible element of the J-pop industry that Johnny’s And Associates lords over everyone. Everything today can be subversive if you stretch it enough, but Homiez can at times genuinely feel daring in how it warps sounds from a group monitored by a talent agency that won’t even let photos of their idols appear…well, anywhere. Don’t let Johnny hear this, he’ll release the hounds! Though there are moments of outright adoration…Skirt straight-up cover “Fly,” and it seems like there are no winks involved (not quite the case with Marshmallow Honeymoon’s blitzed-out karaoke version of “Dynamite”).

The rap thing probably would be more of an issue in 2014, but it’s 2016 and major music sites are writing enthusiastically about mixtapes put together by Hamburger Helper, so we are through the looking glass on that one.

Also, despite those rap signifiers, the music on Homiez is all over the place, from cut-and-paste sampledelica dance to acid house tracks to a “swamp/screwed” take on SMAP’s “Shake” that turns it into some sort of hell soundtrack apt for the Heffalump and Woozles portion of that Disneyland Winnie The Pooh ride. Ultimately, listening to this collection, it works because it isn’t a total piss take — everyone involved with Homiez pokes at SMAP and Johhny’s & Associates (because c’mon they deserve it), but in many cases this sounds like artists having fun with something that should be just that from the start (pop) but which has been made anything but by all involved in it (Johnny & Associates, mostly). SMAP are one of the most ever-present groups in Japanese music history, but have been made to feel like they exist behind a plate of thick glass. This album, in a small and silly way, tries to change that a little.

Get it here (before it gets taken down maybe?) or listen below.