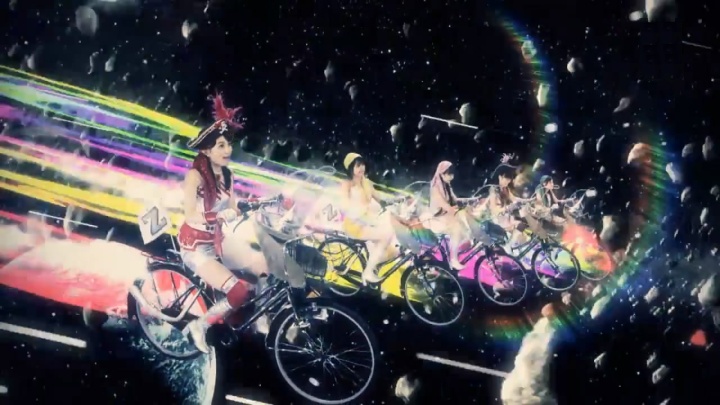 Music Station has been on Spring vacation for three weeks now, and I’m itching to yack about J-Pop, so today I’m featuring a special edition of this feature on a group I’ve never seen on the television program I use as a jumping-off point for snark/secret love. That would be Momoiro Clover Z, a Power-Rangers-esque (more on that later) idol outfit that has had pretty solid success on the Oricon Charts and has recently gotten some overseas attention for the video for their single “Infinite Love” (more on that later too). I’ve managed to go almost three years in Japan without hearing a single note of Momoiro, but this past week I finally broke and listened to the peppy group…and was pretty shocked at what I heard. So, with Music Station’s staff still chilling on hammocks somewhere, I’m gonna devote this week’s edition to writing about all nine of Momoiro Clover Z’s singles. Buckle up.

Momoiro Clover (the “Z” would come later) formed in 2008, and a year later release their first single “Momoiro Punch.” Originally, Momoiro opted to embrace one of the most blasé images a group of horrifyingly young women in Japan could be saddled with – schoolgirl singers. Enter “Momoiro Punch,” featuring a video opening with a quick introduction of each member and a flurry of photos that seem ripped out of some private photo album and turned into a One True Media slideshow of uncomfortableness. By choosing to go the schoolgirl route, Momoiro basically opted to emphasize image over music…not a bad choice, considering the actual sound of “Punch” is unremarkable outside of the summer-festival taiko drum strikes. “Punch” came out in August of 2009, only a couple months before AKB48 went from geek obsession to household name via their single “River.” And, for as much shit I pile on AKB, “River” sounds a billion times more grabbing than “Punch” or the follow-up single “Mirai E Susume!” (so uninteresting and re-hashed a brief mention like this seems appropriate). Yet Momoiro would soon be running hyperspeed laps around AKB48’s type of pop.

Come 2010, Momoiro Clover’s image still veered to the boring-creepy schoolgirl schtick, but their music was starting to develop a personality. “Ikuze! Kaitō Shōjo” finds the members of the group trying to stand out instead of everyone melting into a gross puddle. Check the quickly-spoken asides from the singers, and the way the song/video emphasize who is singing at what point, rather than the all-together-now vibe of the 2009 singles. Plenty of other idol groups indulge in this cutesy tag-team vocal work, but Momoiro do it particularly well. The music itself, meanwhile, isn’t quite as interesting as the singing, but it is getting there – the single goes through different sections, and isn’t afraid to swing into wildly different places from minute to minute.

“Pinky Jones,” out later that year, doesn’t do much to advance the group’s image beyond “each member wears a different color.” And the less said about the video’s Native American theme the better (shudders). The song, though, is Momoiro starting to get batshit insane. The majority of “Pinky Jones” runs at a speed appropriate for an Akihabara arcade…pretty fast, if you don’t measure speed in terms of gaming centers…and is catchy enough that if this button-mashing pace was all to subside on, it wouldn’t be that bad. Yet the people behind this song started having some fun with Momoiro, and they actually fit in two moments on “Pinky Jones” where the group go Bollywood. Most prominently at the 1:25 mark, the hyper-pop stops and something resembling Indian (which, uhhhh, did they screw up the Indian imagery for the video maybe?) music pipes in. It’s a total left-field surprise…and it sort of rules in how bizarre it is.

Things would only get stranger…

A total stopgap that isn’t terribly interesting to talk about, especially considering what comes next. Features one nifty trick…while the verses go about in a goofy vaudevillian style, the chorus goes Millenium Falcon as everything picks up and practically charges in from stage right. There is also kind of a cool techno-like breakdown later in the song that leads to the back-half of “Mirai Bowl” getting a bit more dramatic.

Sometime after “Mirai Bowl,” Akari Hayama (the blue one) decided to leave the group. Instead of replace her, the group renamed itself Momoiro Clover Z and used the opportunity to alter their image. They would no longer be another gaggle of school-girl idols singing about bowling but would rather adopt the persona of…Power Rangers.

Patrick Macias wrote a good article about Momoiro Clover Z and this Saturday-morning entertainment image, but I’ll just go over it quickly. Whereas in America the Power Rangers sprung up in the 1990’s as a way to sell action figures, superhero shows using the Power Rangers’ template (a team of heroes, each member wearing a different color) have been kicking for decades. The concept is so popular many cities have their own Power Ranger units – my old rural home in Mie prefecture, for example, had one that went around and taught kids how to be good members of the community.

Momoiro Clover Z commit to this image, and don’t half ass it. While other J-Pop groups often just come off as walking brands with boring songs underneath, Momoiro Clover Z go all out, the music zig-zagging from idea to idea like an ADHD cartoon. The above video, their first with the “Z,” is half single, half infomercial. They do typical idol stuff like introduce themselves, but they each also have a “power” (yellow can eat lots of food, green can lift heavy stuff, purple can electrocute herself I guess). The group even boasts a bit of self awareness – at one point, the voice-over dude tries to introduce “blue,” met with silence as she left the group.

The next two singles found the group distancing themselves from the Power Ranger schtick while still being obsessed with image. They dressed up as ninjas and then as salarymen/construction workers. The music itself wasn’t as mad-cap as their previous single, Momoiro Clover Z playing up whatever costumes they had to wear more than the song (check the extended intro for “D’ No Junjo”).

This served as my introduction to Momoiro Clover Z earlier this week, the inspiration for this special article and such a disorienting experience I had to write something about it. This song apparently serves as the theme song for some anime about pirates…hence the space-pirate costumes…but I could care less because “Infinite Love” exists in a universe separate from whatever cartoon this pops up in. Momoiro Clover Z actually live up to the ridiculous standards so many assign to J-Pop with “Infinite Love.”

Some have called this the J-Pop “Bohemian Rhapsody,” and the song’s multiple segments and general theatrical feel certainly support that. Yet “Bohemian Rhapsody” might not have been this zany – former Megadeath guitarist Marty Friedman provides the hard-rock guitar, and I’d love to meet whoever handles the death-metal pounding. The main chorus sounds AKB-friendly, but with the dramatic addition of a chorus – like, the type that would sing at a viking funeral – behind them. As this is Momoiro Clover Z, there are spoken-word segments. Guitar solos? Yes.

Thing is, I can’t imagine listening to “Infinite Love” in any atmosphere where YouTube isn’t open in Google Chrome. The song, while bonkers, sounds strange by itself. Coupled with the video…space pirates! on bikes! glowing eyes!…this makes perfect sense. And that’s Momoiro Clover Z’s real accomplishment – in a J-Pop environment where image trumps music, Momoiro have managed to make every aspect of them, from music to image to videos, connect in a unified way. Also, with “Infinite Love,” they are one of the few J-Pop acts of today to have fun with what they do. That lack of rigidness and willingness to go weird is what Japanese music needs right now, something that sticks out. Marty Friedman optional.

← Self-Promotion Plus: Reviewing MiChi’s Therapy For The Japan Times
Watch A Preview Of Perfume’s “Spring Of Life” Video →