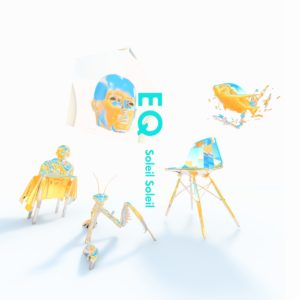 It’s a little too early to start celebrating the decade in music, but Soleil Soleil’s EQ works as a nice cap to a stretch of time that saw the Kansai electronic scene just flourish. The Osaka producer orbited around parties like INNIT at the start of the 2010s, first releasing music under the name OMEGABOY (now all vanished) before taking on the new name and pivoting towards warmer-climes house music. EQ captures Soleil at their most blissed out, starting from the breezy bounce of “Sunrise,” wherein synthesizer adds a woozy affect to the track, to the total release of closer “Hologram,” which slices up pop-born vocal samples and places them against piano lines and synthesized sax blurts to create an early evening blow out. But the most intriguing bits — and the parts capturing the latter part of the decade best — come via collaboration. “Welcome To My House” finds rapper Sola The Luva making himself comfortable against one of the funkier beats Soleil has laid down, dropping lines like “yeah we break laws” that add a little tension to something that sounds chill rather than crime adjacent. Sola pops up again on “JK Rolling” (uhhhh, Harry Potter reference?) to deliver a more in-his-wheel-house rap over a shuffling beat, joined in the latter half by Kyoto’s Native Rapper (who we will get to later today). It’s a nice mix of ideas that have been percolating in this corner of Japanese music all decade long, synthesized in to one big blast. Get it here.

Soleil Soleil is closing out August nicely with two new dance tracks apt for pre-sunset evenings and pleasant temperatures. The Osaka producer has long created great house from pop samples, and “Medicine” excels at delivering energy. It’s simple, but Soleil Soleil knows how to use basic ingredients to create something rollicking, and in the case of this song something that has a slight jitter to in it (see: the way those words crash into one another). Listen to that one above. “One More Reason” is just far more euphoric, using split-second vocal snippets to create a dizzying run of dance music. Details in this one are less important, because the way everything blurs together into ecstasy wins the day. Listen below.

Given how everything sounds vaguely tropical in 2017 — well, that or totally grey — it’s weird thinking back on how Osaka’s Soleil Soleil was so ahead of this trend. If he was outside Asia, he’d be Kygo! However, the Kansai artist is always a few steps ahead of the sounds clogging festival grounds, and his new collection My Way Or The Highway finds Soleil Soleil exploring many new areas of dance music. They range from the pleasant afternoon shuffle of opener “What’s Going On” (featuring some lovely horn blurts) and a pitch-shifted take on his own “If I Could” featuring Cloudy Busey, which takes the song from melancholy to menace. There are surprisingly stripped-down numbers such as “Night Jam,” and then some radical reimaginings of existing songs, like Passion Pit’s “Little Secrets.” Listen above.

Osaka’s Onsen Records returns with Onsen Compilation #3, a relatively quick but solid collection of electronic music featuring a few familiar faces and new names. Label head U-Z takes a stab at “Hip-Hop,” a wobbly number featuring verses from Darrion Parker, while the back half of the comp leans towards instrumental hip-hop cuts, a hit and miss proposition (albeit one mentioned right on the title…”beats from the internet”). However, right in the middle is Soleil Soleil’s “I Want It Out,” a bouncy electro-pop track featuring uncredited vocals from Cloudy Busey. It’s the highlight, and worth the download all on its own. Get it here, or listen above. 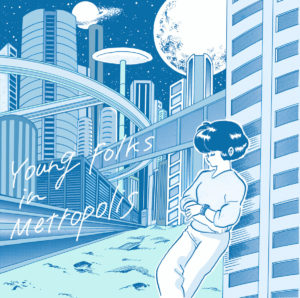 The city sits at the center of Japanese life in 2016, as the number of people moving to major metropolitan centers keeps growing while the countryside — and even mid-size cities — see populations dwindle, once bustling shopping arcades reduced to shuttered-up artifacts. Music, accordingly, has shifted towards a more urban crowd. This has been a banner year for “new City Pop,” a trend coined primarily by companies and magazines playing off City Pop, a genre that was popular back in the ’80s and with a similar megaopolis bend. The actual artists are rarely as indebted to, say, Toshiki Kadomatsu, as they are Random Access Memories, but spiritually do share a lot in common…primarily capturing the mindset of young people living in a city such as Tokyo or Osaka. Suchmos, Lucky Tapes, Cero and more make tight, laid back songs all about taking it easy and savoring youth.

Those acts have monopolized attention…but how has the indie scene responded? I mean, they are based in the same cities, creating their own sounds reflecting the circumstances they find themselves in. Young Folks In Metropolis offers a wonderful new perspective on city sounds, one veering well beyond simply smooth. This comp was organized by Poor Vacation, and it works in the same fashion as Moscow Club’s Ç86 or any of Ano(t)raks’ comp collections. It highlights a wide variety of independent artists, featuring a wide variety of sounds and ideas. If a large chunk of larger label-backed bands have sounds a bit too glossy and smooth…and maybe just pure rock…for you, Young Folks In Metropolis offers an alternative.

Which isn’t to say it avoids the vaguely tropical. City Pop has had a resurgence across the board, and spots here draw from it, including album opener “OG Love” by ’80s revivalists The Oto Factory, who dip their voices in Vocoder and load up on funk synthesizers. Part of the thrill here is how the funk sounds a group like Suchmos has taken gets warped — Evening Cinema’s “Moonbeams” is a shimmering rock number, but made slightly unnerving via digital vocal processing, which leaves the singer sounding like he’s vanishing. Crucially, it doesn’t rest on this style. Pictured Resort would seem like a good candidate to contribute a beach-dreaming bit of indie-pop…but there “Days In Maui” is sun-grazed dance, the band opting out of traditional rock for something that slots up nicely with Half Mile Beach Group’s “Monica” and Nite Body’s “Mercury Falls.”

It’s as loaded a compilation to come out of Japan this year, and one that expands the boundaries of what younger artists are doing in the country today. It makes room for the dizzying dance of Soleil Soleil, the squiggly bounce of Pasocom Music Club and the haunting R&B of Far Farm. Even Beef Fantasy stops by with an acoustic number about the internet. Whatever way it bends, Young Folks In Metropolis offers another view of city-born music, and an excellent one at that.