It isn’t a total move into the sunlight, but “Orange” finds Paellas moving the curtains back a little bit. It is there first “digital single,” so I suppose they wanted to avoid the backstreet glow of breakout “Shooting Star” this time around. A synth-melody pops along for most of the song, while the drum beat and bass playing lean closer to upbeat than the shadowy funk of previous releases. Hoshino Gen they ain’t when it comes for the happy stuff, but this is certainly perking up for them. Well, almost all of them — the key remains vocalist Matton singing in a way that always sounds just slightly melancholy, even if the sounds around him are a bit more smiley. You can change the background, but you can’t shake the lingering ennui. Listen above.

What’s made Paellas’ rise up the ranks over the last year so surprising is how the group’s songs are unrelentingly downcast. This decision to cloud the familiar funk and rock elements that have become trendy in recent years in a fog — a choice they’ve been making since their earliest indie-pop cuts, the group sounding more like damned lounge performers then Crayola-bright twee-sters — has helped them stand out with folks who maybe want city-based music that actually captures all the crappy parts of urban living. Yet breakout “Shooting Star” is so isolated and pained, a mood carrying over to last year’s excellent D.R.E.A.M. EP.

“Echo” is the rare moment of Paellas letting a little light into their nocturnal numbers. Unease and melancholy still powers the group’s music — Tatsuya Matsumoto’s singing always carries a weariness to it, even when it sounds like he’s pushing himself into a brighter mood — but now come flashes of morning. See it in the pre-chorus keyboards, or the little dashes of stardust grazing the hook. Or how loose-limbed the band allow themselves to get at points as Matsumoto sings “hold on, hold on.” What once always felt constricted now comes off as freedom. Listen above. 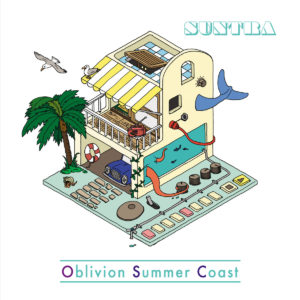 There were plenty of chances to escape to the sea if you followed Japanese music in 2017. Suchmos broke big with their Shonan-inspired smoothness, while slightly more ragged bands such as never young beach and Yogee New Waves laid out what to expect from their names even before hearing their beach-rock-inspired jams. You had to dig a little deeper, though, to find a collection sounding apt for the coastline, but still touching on the resort-inspired breeze of city pop and featuring a very specific kind of summer melancholic. Producer Suntra nailed all of that with Oblivion Summer Coast. It features plenty of laid back moments, from the plinky-plonky stroll of “Palm Avenue” to the strut of “Tokiwa Resort.” And Suntra could just let loose too — the nearly ten-minute-long “Six Nights” is just massive. But sweeping through all of Oblivion Summer were complicated feelings conveyed via simple but affecting melodies, through aching keyboard notes on “Starry Night” down to the skip of “Maboroshi Bayside.” Get it here, or listen below.

END_OF_DOCUMENT_TOKEN_TO_BE_REPLACED

Sometimes, you do something long enough it ends up aligning just right with a trend…or presents a shadow version of a booming sound. Paellas have been creating shadowy music since around 2012, initially starting off making late-night-lounge indie-pop before transitioning to a style drawing more from R&B and weaving in electronic touches, but maintaining the after-midnight despair. Following a great album late last year in Pressure, they seem poised to ratchet it up to the next level on forthcoming mini affair D.R.E.A.M. The sound mostly remains the same — the bass lines play out tightly, while the vocals continue to do downcast near-whispering just right. They add in a nifty keyboard solo. It struts, sadly, and hovers around a hooky chorus. It is very much a Paellas’ song, not far removed from the nocturnal laments of Pressure. Yet now all those sounds have become staples of mainstream Japanese music, or at least the next level under (the opening drum roll made me instantly think of Chai’s “Sayonara Complex,” except with dark alleys replacing sun-lit streets). If Suchmos represent all things laid back, cool and positive about Japanese music in 2017, Paellas have stumbled into a mirror role, using the same sonic palette to add some darker tones to these often polished sounds. Here’s hoping they connect with those burnt out from all the brightness. Watch above.

No rest for Osaka’s Paellas, even after releasing one of the year’s better EPs back in January. They are prepping a new double-side single, and shared new song “Pears” this weekend (the other one is called “Distance” — so maybe this one, back when they were a bit more fuzzy rock?). “Pears” is certainly of the Paellas now, as it is another mid-tempo shuffler that would probably get you bobbing along on the drunken walk home from a night out. But it’s all undercut by a downtrodden mood the band specialize in, that funky strut offset by vocals that sound close to tearing up. Listen above.