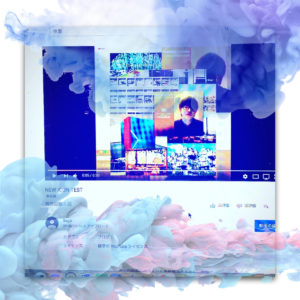 The artists on Wasabi Tapes go under a lot of names, but the label has developed a unifying sound that touches nearly all their releases, give or take a Nikkei. They wrangle chaos into something focused, using jarring samples and synthesizer notes smooshed together into something disorienting but fascinating (and, really, fun as hell). DJ Gaga Slime & MC Pure Photoshop Core’s Golden Slime Core builds on the overwhelming vibe of N. Brennan’s releases via the label, letting samples sourced from 21st century video games, The-Dream albums, and more to create headrushes, using modern media as building blocks to their own loopy world. “Andromeda Galaxy” cushions the explosion SFX with breezy synths pushed to the grotesque, while “Gokiburi” replicates Pachinko Machine Music from someone’s bedroom. In a lot of ways, Golden Slime Core is one of the best gateways into their world, because you can find a little of every artist mixed up somewhere in the madness. Get it here, or listen below.