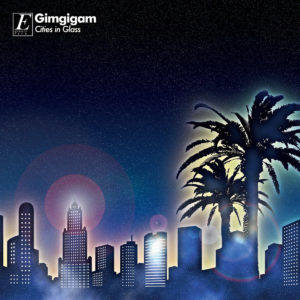 It’s incredible how even the slightest change to an expected formula can re-invigorate a sound that once seemed completely mined clean. Japanese producer Gimgigam’s Cities In Glass comes via Elemental 95, a label dabbling in all sorts of genre but which is most associated with vaporwave, a niche that feels pretty drained in 2018, unless they discover some new Greek ruins in the near future. But Cities In Glass moves in a far slinkier style, using samples (and it appears guitar) in a more energetic way and treating them like livelier beats. It’s kind of a midpoint between vaporwave and future funk’s ’80s sheen, and the lo-fi hip-hop beats for studying channels. “VOU” straight-up struts out the gate, not hiding behind any distortion but rather zeroing in on some particularly funky sounds and letting them work their magic. Though the disorienting details can go a long way — “Glass Beret” ripples up its laid-back atmosphere with a distorted vocal sample that adds some sadness to the surrounding glitz, while the clipped voices running through “Turquoise” adds a nice roughness you can still bop along to. It burns itself out by the end — “Plastic Poem” chooses a really annoying string arrangement and pop vocal to loop into the ground — but after all the energy before it, who can blame it? Get it here, or listen below.