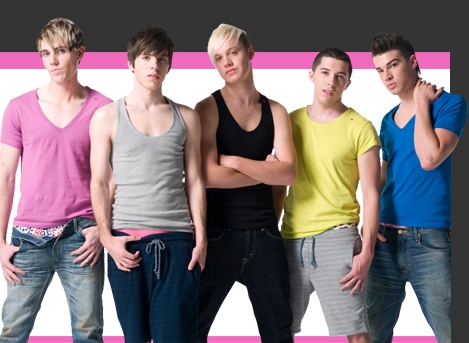 A friend and I ventured deep into the bowels of the Nagoya underground back in August, a place not quite subterranean as much as just a giant shopping mall with absolutely no natural light sneaking in. We came in search of sushi, but found ourselves staring down a Barbie-pink store entrance complete with window offering a glimpse at some garishly dressed mannequins. It was a store for the brand Peach John, and most eye-catching of all was a large poster featuring five Westerners seemingly carved out of the same material responsible for 98 Degrees.

“Who the hell are those guys?” my friend inquired.

“Oh, those are the EastWest Boys. They are a boy band, but made up of some Americans, but they only really get marketed in Japan.” I think I sounded this coherent.

Indeed it is, to the point where I came close multiple times to writing a sprawling essay (that’s how I pictured it in my head) about EastWest Boys and what they mean for the Japanese music industry AND the state of foreigner tolerance in the country itself. Needless to say this turned out be far more ambitious than I imagined. Turns out trying to connect a boy band to hyper-nationalism isn’t an easy task. Yet as the year comes to a close lets take a moment to remember…just how weird/genius EastWest Boys were.

Mutantfrog Travelogue wrote up a great introduction to this boy band earlier in the year (just ignore the whole Johnny’s mistake), but to sum it up – EastWest Boys hail from Los Angeles but it seems their marketed mostly at a Japanese audience. They’ve traveled to this country several times, can speak a little bit of the language and, as my friend and I saw, served as the cover boys for some fashion brand’s marketing campaign. The people behind the group really drum up the outsider angle, as most of the group’s online media comes in English…as do the actual vocals in their songs. The music embraces all the most loathsome qualities of the late 90’s boy band boom, all canned sound matched with dire wordplay. Sample line: “you treated me bad/made me sad/now you’ve lost what we had.”

The music might be excruciating, but the idea shouldn’t be scoffed at. Given Japan’s love of everything American coupled with an undying infatuation with the Backstreet Boys (one EastWest Boy is named AJ for fuck’s sakes), the concept of a Western music group made primarily for the Japanese could be a big money rustler. All in theory though…EastWest Boys are far from a mainstream hit (one big reason any of my deep-thinking on the subject never went anywhere) and more of a cult thing. Still, the idea could work with a little tinkering though such a triumph isn’t exactly a plus for the overall quality of J-Pop today.

Weirder still were a series of “meet the band” clips featured online earlier in the year, now mysteriously “removed by user” on YouTube. Each short video introduced one member of the band via a goofy origin story…one kid tried out for his high school basketball team, sucked because he really just wanted to be a musician and, lucky him, a portal featuring the words “go East” appeared before him. The weird implications of that – you suck in America, go to Japan!…plays in to all sorts of stereotypes already exhausted by the rinse-and-repeat Charisma Man comic. EastWest Boys seem to be playing to a similar assumption…that Japanese women (I guess who like bad pop music) love Western men. Like I said, it’s bizarre.

One member’s Twitter hints at the group recording new music meaning the EastWest Boy brand could continue to grow and eventually warrant that obnoxious essay. Until then, they are just a strange group modeling in front of plastic people in Nagoya to me.

← Five Songs From 2010 That Were Great/Interesting That Couldn’t Actually Make It Onto My Top Songs List
Controlled Karaoke: Lullatone Want To Make Your Christmas Even Better…For Only Ten Bucks! →