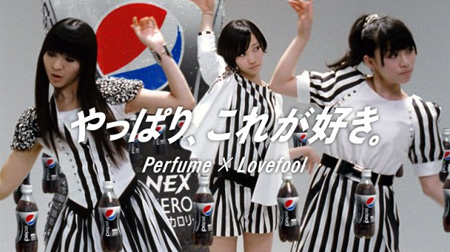 Any day now, you can expect a nice countdown of my favorite Japanese songs of 2010. Hopefully. Until then, though, let’s look at a few tracks that didn’t make the cut. This isn’t an honorable mentions deal…sorry, that could take all day if we have to tally up runner-ups…but rather five songs I heard in 2010 that left an impression but didn’t really qualify for my mental lists for whatever reason I thought up at the time. All five of these songs at least flirt with something interesting, or show potential maybe doomed to never be realized or happen to come from Korea. Let’s give the oddballs some time in the sun.

Hope remains that a fully-formed version of this Cardigan’s cover sneaks onto Perfume’s next proper album, but for now it’s just a snippet of potential used to sell zero-calorie soda. Yet what a snippet it is…giving a group like Perfume, built to boil pop songs down to a pleasurable liquid before using said substance to construct some sort of insanely catchy machinery, one of the catchiest pop songs ever to tinker with stands as one of the most brilliantly unexplored ideas of the year. Just listen to that chorus, a classic recipe given a dash of robo-flavor. It’s fun to think of how they would handle the verses…the above peak hints at a squiggly club thump, but that could just be filler noise for the Pepsi execs looking for something “edgy…”even if the answer probably won’t come. This tiny blast of pop seemed thrilling enough to warrant a remix. Imagine a full-length version!

The movie this track serves as the title track and the fictional band’s album featuring this song came out in 2010, but “BANDAGE” the single wiggled it’s way into the world in late 2009 meaning from a technical standpoint it isn’t one of the best songs of 2010. Still, we didn’t do a best of 2009 list where we could give this song it’s due, so let’s make some space a year later to celebrate the best music bound to come out of the KAT-TUN collective probably ever. Back in January I said of “BANDAGE”:

“Bandage” succeeds because of how LANDS manages to merge two potentially repetitive styles together – indie rock and disco. It’s easy to imagine being a total slog if LANDS sticking to just one of those genres – a problem dotting a lot of Olympos – but the group behind the song never rest on one and, with a little touch of J-Pop (those fluttery synths at the chorus), the track stays captivating for its whole length. The beat draws you in initially, while the guitar work keeps things interesting. Credit also goes to [Jin] Akanishi’s serpentine singing, which carries an air of lust as it weaves around the music. “Bandage” doesn’t buck any major J-Pop trends, but rather uses lesser utilized tactics to craft a top-notch pop number.

I stick by it. This song flat out grooves out, knowing how to milk a very good chorus. The movie and album featuring this tune shouldn’t be particularly remembered for anything memorable, but “BANDAGE” the song needs to be put in some sort of “great J-Pop” time capsule and broken out when alien scientists ten thousand years from now discover AKB48.

No more words about this one.

Like giving an Oscar to Return Of The King, this honor mostly goes out thanks to Baroque’s entire 2010 remix work. His approach isn’t complex and, frankly, shouldn’t work in theory…take a song, make it a little dancier and then steamroll it with crunchy noise. Yet what could end up blog house leftovers turns out to be muscled-up juggernauts under Baroque’s guidance. His rework of Kraft-tastic Chromeo’s already catchy “Don’t Turn The Lights On” shows his skills at his peaks…here a perfectly fine piece of ironic-ish 80s-inspired pop gets turned into a Killdozer, surging ahead with a force the original lacks completely. Baroque doesn’t change a ton for his remix…but his slight tinkering makes it all his own. Keep it up man.

Theory #1: The creepiest pop song released in Japan this year. It doesn’t even matter if the effect was intentional or not…the final product seems off. What should be a completely innocuous summer groove becomes unsettling thanks to a few additions…the “dead man walking” whistling intro, for one. Moumoon herself sings in a strangely emotionless hop-sing, coming off like a detached pop Speak ‘N’ Spell babbling on about “parties” and “sun” and all sorts of other summer song cliches. The production only adds to the mystery more – the weird electro-ripples gliding over the chorus seem very out of place, and the way Moumoon’s voice sometimes goes under seemingly random manipulation. Something about “Sunshine Girl” seems subversively strange, and it’s one of the weirder songs to think about this year.

Theory #2: I think way too much about J-Pop and need a vacation. If this just happens to be a ditzy pop song with uninspired singing, I don’t want it near any year-end list of mine.