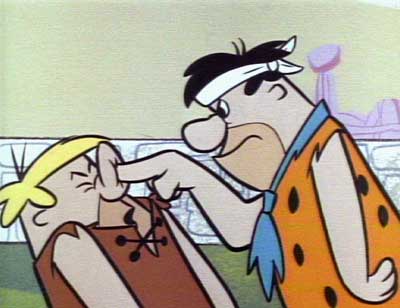 A few more facts have surfaced about the shrouded-in-mystery Melancholic Masculinity. The awkwardly titled outfit is the solo project of one of the members of the multi-versatile AAPS, a flagship act on CUZ ME PAIN. MM also released a new song called “Emmanuel” back in February (whoops!). Most surprising of all though is that “Emmanuel” reveals MM to be a big fan of The Flintstones…to the point where a conversation between Fred, Wilma and (eventually) Barney Rubble plays on loop during the whole track’s run. Though hearing Fred shout at Wilma about his automatic toothbrush (I wonder what one-liner the animal said after that!) is interesting, the highlight of “Emmanuel” is the smooth-as-margarine guitar sample jogging through this short song, a summery stroll of a line that recalls the stuff Bibio explores. Considering how agoraphobic AAPS and CUZ ME PAIN sounds in general, the bright sunbeams blasting through “Emmanuel” sound revelatory. Listen below.