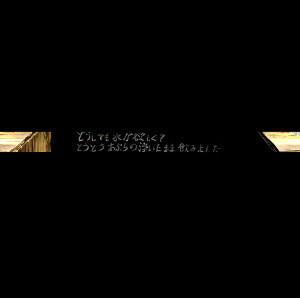 First off — let’s divorce this release from any politics which is a pretty reckless move but, in case you don’t want to deal with any message music — Atomic Bomb Compilation Vol. 3, like the two installments before it, is a hell of a showcase of some of Japan’s most talented indie producers going. This series leans heavily towards juke music, but Vol. 3 showcases, like, noise collages (Buffalomckee) and skittery IDM (Phobos). Some of the juke tracks don’t even seem particularly political, at least on the surface. I mean, “Make It” is just like a really lighthearted juke [UPDATE: The track’s creator bahnhof::zoo responds: “fyi the message in “make it” is ‘can i make it thru this nuclear shit’ & try to be positive and affirm that yes, we can make it.'”]

OK, but face it — this is a politically charged album from one of the few scenes in Japan that has been consistently raging about the handling of nuclear power post 3/11 and Fukushima. It was released shortly after the 70th anniversaries of the nuclear bombings of Hiroshima (where a lot of these artists are from, including CRZKNY, who spearheads it) and Nagasaki, and days before the first nuclear reactor under new government regulations since 3/11 went live in Kagoshima. Japan’s juke scene has always focused on this issue, and artists in it have always come up with deeply unsettling music, sometimes direct (on Vol. 3, see “Little Mess” by BCOTB with its repetition of “Japanese continue to fight fiercely” and “atomic bomb”) and other times conjuring up a paranoid and apocalyptic vibe (the aforementioned Buffalomckee terror-fest, CRZKNY’s steely “70”). It shoves an issue a lot of people would like you to forget about, and refuses to let the listener forget it. Maybe that’s ultimately why juke is the perfect protest platform — the repeating nature of the music gives you no space to get away from the message. Listen below, or get it here.

← Two For One: Candy Collection (24Poonz) Reproduces Nayutanayuta’s “Stargazer”
New Tofubeats: “I Believe In You” →