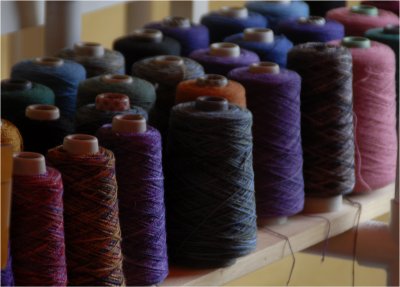 Electronic music isn’t just having a big 2010, it’s undergoing a massive Sea Change on multiple fronts. I’ll save you the essay I could write about Flying Lotus and how Cosmogramma acts like some blippy wormhole into the most amazing dimension ever and just leave it at he probably made my favorite album of 2010, one that manages to gather all sorts of electronic music elements and combine them into something insane. He’s not alone – Baths, The Gaslamp Killer, Teebs and several others also put out mind-bending stuff, and trying to scratch the surface of every sidepath dubstep took seems futile on WordPress. Now as top ten lists start taking shape, Japan’s Nini Tounuma emerges from the shadows with an album that might signal a new twist in…downtempo?

It’s a little bit of wishful thinking on my part given the only hints Tounuma might be up to something fascinating are one fully formed song and an album sampler. The teaser presumably crams every song on her upcoming Woolgathering LP into a less-than-five-minutes block that probably shouldn’t be leaned on too heavily. But the one complete tune, “Face It,” makes me feel a bit more confident. The song definitely contains elements that place it squarely in the “chill-out electronic” music category – “Face It” boasts a generally laid-back vibe wherein the music never really goes beyond kinda-head boppable. Crucially, like FlyLo and the other artists above, Tounuma’s not afraid to spice “Face It” up. The vocals sound sampled, multi-tracked singing blending and breaking and then coming back together to form a hypnotic swirl of a performance. The Junior Boys-like tumbling electronics add a pretty sheen to the entire thing, while what sound like tightly snipped hip-hop samples lurk far in the back adding more character to “Face It.” For a relatively relaxed jam, there is a lot going on…peep the mid-song shift up that sounds like Tounuma taking the whole shebang underwater…and is a great listen. Best of all, that teaser I mentioned hints at moments even more thrilling. Woolgathering drops November 17 so we won’t have to wait long to see if it’s actually as awesome as I think it could be, but listen to the teaser and “Face It” over here.

← In Which This Blog Inches Closer To Being Only About K-Pop: Girls Generation Makes Japanese Chart History
Controlled Karaoke: An Open Letter To All Reviewers Writing About The Suzan’s New Album →