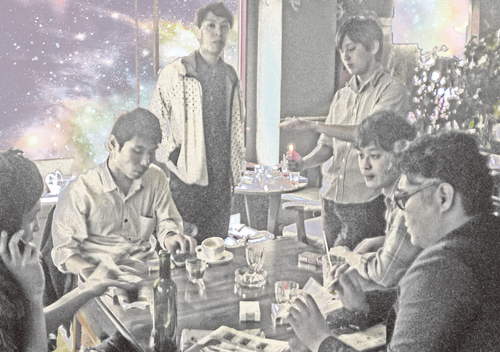 We spoke to bassist Kai Ito and vocalist Ryuyu Ishigami from Kyoto’s Hotel Mexico ahead of their first overseas performances in Brooklyn this weekend (Aug. 24 at The Knitting Factory and Aug. 26 at Glasslands Gallery). The band have released the album His Jewelled Letter Box on local imprint Second Royal and last year they released a single on Double Denim in the U.K. They’ve played gigs with acts such as Jesse Ruins, Pictureplane and Seiho. With two Buddhist monks in the band, we wanted to know how a Japanese indie act works around the demands of the temple and prepares for a show overseas.

MBM: Hotel Mexico will be playing shows overseas for the first time this weekend. How are you preparing for them?

KAI ITO: We’ve been practicing a lot, but I don’t think we can do anything more than what we usually do at a practice. I’ve found that it’s more difficult preparing for the trip itself. We’ve never had the experience of moving our equipment via airplane, so that’s been the biggest concern.

MBM: Are you excited for the shows?

ITO: Yeah, we’re really happy about the opportunity. The band has been discussing the need to try playing overseas for the past year, so we’re excited to finally have the chance. We also wanted to play shows on the West Coast, like in Los Angeles or San Francisco – or even Vancouver, but due to our personal schedules we could only fit in a weekend in New York. We’re really gutted about that, after it was announced we’d be playing in New York, we started getting lots of emails from venues on the West Coast asking us to come. Like I said, time doesn’t allow it. However, it will be incredible to play the Knitting Factory and Glasslands Gallery in Brooklyn. It’s great to be playing at venues that host the kind of bands we like to listen to.

MBM: Are you nervous at all?

ITO: We have some concerns, I don’t know what it’s like to play in front of an American audience or how to behave with the venue owners. There are certain “ways to behave” in Japan. We’re mostly just worried about our equipment though, preparations regarding the equipment must be different overseas … I don’t think I’ll relax until we’ve finished a successful show!

MBM: How have your shows in Japan changed over the years?

ITO: The biggest difference is that we now play live with six members as opposed to just five. We always had six members in the band, but just for recording. We’ve also changed the structures of our early songs, so that’s different as well. Also, we usually play in Tokyo, Osaka, Nagoya and Kyoto, but this spring we played Okayama and Hiroshima. It’s like an American band playing New York, Chicago and Los Angeles branching out to maybe Portland or Denver? We are also setting up shows in Shizuoka and Shimane (maybe like Memphis or Phoenix). There’ll be a difference in the crowds there.

MBM: You’re based in Kyoto, what is a typical Hotel Mexico show like on home turf?

ITO: The Kyoto shows are really fun for us, and we live close to the venues so it’s easy to get home! We’ll often play at a club called Metro when our label, Second Royal, does an event. Usually the other bands and DJs are our labelmates. There are a lot of regulars, so we’ve grown out of the band-fan dynamic and now we just hang out and talk about our everyday lives after the shows. It’s the same when we play at OZ, an event in Osaka. However, the vibe is so comfortable that I find it’s easier to make mistakes. And regulars can catch those!

MBM: How did the band come together?

ITO: We all went to the same university. We are different ages, but we were all in the same music club. We didn’t form a band when we knew each other in university, but after graduation I got together with Ishigami, (guitarist) Hitoshi Kikuchi and (drummer) Masaaki Iwamoto to try playing together. We started writing material in 2009 and played our first gig in 2010. We were joined by (synth player) Jiko Kobayashi and (second guitarist) Jiro Mizushima in time for our first gig.

MBM: Three of your members are also monks, how does that impact the band?

RYUYU ISHIGAMI: What we do as a band and our religious activities don’t have any direct link to each other. Some of the lyrics could come from our religious views, I may use metaphors in the songs to express them, but I’m not referring to a specific religion (in the monotheist sense). It’s my own interpretation, but I feel that religion isn’t based on one’s thoughts and beliefs but rather that religion is built on human actions and experience. Actually, for me Hotel Mexico has been my way of momentarily escaping the role of a religious person or worker.

MBM: Is it harder to schedule around a monk’s schedule or a salaryman’s schedule?

ITO: Monks are generally busy in the middle of August and around the New Years holidays, so we can’t get together as a band at those times. There are other religious events during the year at which monks have to perform their duties. However, salarymen [the Japanese term for a businessman] are always busy, so we usually have to limit band activities to the weekends. That’s why it is difficult to have longer tours.

MBM: Finally, what kind of music are you influenced by? There tends to be a division among Japanese fans who listen to either only Japanese or only foreign music. Do you listen to one more than the other?

ITO: My favorite Japanese group right now is Jesse Ruins. We’ve done some events together with the Cuz Me Pain crew. One of the shows we did in Kyoto had Jesse Ruins and Faron Square, who were really good live. It’s difficult to say what the other members like, we all have different tastes. We all grew up liking Phoenix, maybe that’s why we try to play pop music that will make people want to dance. We don’t limit ourselves to listening to indie, but the band members tend to like music that’s edgier, weirder and darker than most. If you can combine the edgy and strange into a pop song? Then that’s really cool. I don’t like songs that are easy, they’re boring. Japanese chart music tends to be like that. But then again so-called underground music gets too dark or too weird so it can be less accessible to average listeners. If today’s music was like the music our parents listened to (a genre called Showa Pop), then we’d probably listen to more Japanese artists.