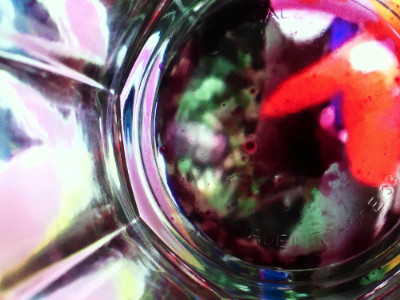 For research purposes, I went to a Vocaloid event this past weekend. One room was set off for aspiring Vocaloid producers and bands to push their various products – which mostly meant CDs, although the most popular items tended to be badges, stickers and uhhhhh flasks. The other, more crowded space, though, hosted several Vocaloid DJs, who took turns spinning songs featuring the distinctive singing synthesizer. Nearly every single song – the good and the bad, the Skrillex-aping tracks to the more pop moments – pushed the software-generated vocals to the forefront. It came off as unambitious – few artists (at least featured at this event) wanted to use the Vocaloid program for anything but generating lead vocals.

“Magical Fizzy Drink” by Tokyo’s mus.hiba bucks that trend, and the producer ends up with a deeply satisfying song as a result. This track features Yufu Sekka…who, turns out, is a Vocaloid. Instead of push the vocals into the spotlight, mus.hiba buries the voice beneath his shadowy electronics, letting the synths and bass wash over them. Even when the Yufu Sekka singing can be heard, the program is mostly being used to say single syllables. It’s a ghostly affect, one you’d expect from something labelled witch house but not from the Vocaloid scene. Capping it off, mus.hiba introduces some 8-bit squiggles at the tail end of the track, what could have been a geeky touch sounding heavy in context. “Magical Fizzy Drink” shows the sonic potential a Vocaloid program has not as a diva-in-a-box, but as another instrument.