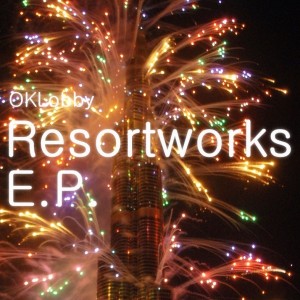 The word “resort” pops up a lot around OKLobby, a producer in Tokyo. His first EP under this name is titled Resortworks, and it includes a song called “Mind Resort Scidaria.” Along with the use of “lobby” in the project’s name, it would be tempting to think that OKLobby would exist somewhere between 2012 en-vogue microgenres city pop and vaporwave. Turns out he sounds closer to what fellow Tokyo-based artist Taquwami has been doing for the past few months, as the three songs on Resortworks are full of rapid-fire drum programming and sliced-up vocal samples. Taquwami’s Blurrywonder, though, stands out because of how uhhhh blurry it all sounds, everything coming together into a dizzying swirl. OKLobby is a touch less messy, his songs often clearer. “Mind Resort Scidaria” features unaltered samples of children chanting and of what sounds like Arabic singing, all over a lush bed of synths. “Fireworks” features manipulated voices, but it still unfolds in a relatively clean fashion, at least until about the midpoint where everything picks up a step.

Besides the above EP, OKLobby has released one other song titled “Life Is A Short Life,” which is the most chilled out song in his small library of releases so far. Listen below.