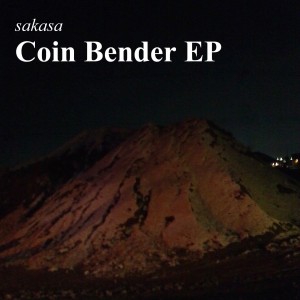 Tokyo might be an urban labyrinth, but the Kansai region of Japan hides just as many nooks. Most tend to define this part of western Japan by the cities of Osaka and Kyoto, both of which have seen a boom in electronic music over the past two years. Right near those two, though, sits Nara, an ancient capital for the country and currently best known as a place to see a giant Buddha and feed some lovely deer. Musically, the sleepy city has produced a few solid acts, but not much in terms of electronic-dance music. Now, hailing from Nara, comes Sakasa with the Coin Bender EP, three songs of forward-thinking beats and noise. “Let your body dance, and let your brain dance more,” the description for this brief release states, and Coin Bender bares a lot of similarities with Nagoya’s House Of Tapes, whose work also focuses on the physical and mental. The opening title track especially makes the comparison apt, as Sakasa builds a maximalist beat out of some body-shaking sounds…including what might be a dentist drill. It’s crushing, but also easy to get swept up into. “Pond,” meanwhile, approaches things a bit more serenely, Sakasa letting several synths glide over one another while the beat builds up, the song turning into a twinkling number that works as both something to reflect to or move to. Get it here.