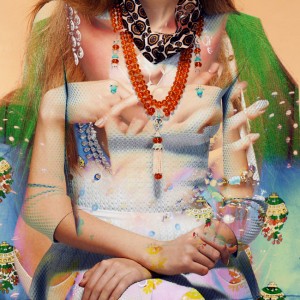 “You R Everything” From Blurrywonder

Up until now, Tokyo music maker Taquwami has been making a name for himself form his bedroom. The young producer has flooded SoundCloud and Bandcamp with dizzying homemade electronic songs. He released his first proper EP, Blurrywonder, via the online label Void Youth this past August and recently remixed the song “Life & Limb” by Nadja. Taquwami will be stepping out of his room for his biggest moment yet – he will play on the same bill as electronic artists Clark and Lapalux on October 12. Make Believe Melodies talked to Taquwami about Blurrywonder, the Internet and time travel.

MBM: When did you realize that you wanted to make music?

TAQUWAMI: It was in January 2011. I was in a band before that and the first real moment I was motivated to write music came when I performed at a high school festival as part of a cover band. I switched to the type of music I’m doing now because it’s easier to do it all by myself. I also wanted to produce music that I’m really interested in, stuff I learned about when I started listening to chillwave and bands such as Washed Out and Toro Y Moi.

MBM: You’ve released all of your music online, the majority of it for free via SoundCloud or Bandcamp. Why go this route?

TAQ: I wanted to see each element of my work, not just the music. CD covers and designs are really important, and choosing the right website is also necessary to maintain a certain aesthetic.

MBM: What has the reaction been to your music online? What sort of people find it and how do they discover it?

TAQ: I’m not well-known enough to receive a lot of negative criticism … but I think more people outside Japan are listening to my songs than Japanese people. The Japanese listeners tend to be people that I know, or their friends. But websites like SoundCloud and Bandcamp have started to become more popular here, so maybe there’s more people who will be able to find me there.

MBM: For your new EP, Blurrywonder, you hooked up with the new label Void Youth. How did that come about?

TAQ: Void Youth is more like a collective than a label, started by a Canadian trackmaker named Hollow Pigeons. He invited me to come aboard and I was told that another Canadian, Ruddyp, was also joining. I knew of both of them so I didn’t hesitate to say yes.

“You R Everything” From Blurrywonder

MBM: How has the response to Blurrywonder been so far?

TAQ: It was smaller than I thought it would be. I need more improvement in mixing and mastering, and I think that’s why it couldn’t stand out. My songs need some improvement, too, and I still lack the ability and the technique to output what is in my mind. But I would like to thank those people who liked my songs even though I still had those difficulties.

MBM: You told us before that the theme of Blurrywonder is “love,” but that you didn’t start recording with a particular theme in mind and instead everything just sort of fell into place. How did this theme develop during the recording process?

TAQ: There’s not much meaning behind it. I came up with the concept after I recorded all the songs. I looked at the title of the songs of the EP, and just thought “Oh, this is about love.” I just came up with it on the spot after thinking about the image of the songs. I’m going to try to be more poetic from now on though!

MBM: What jumped at me while listening to Blurrywonder was the vocal samples and how heavily they contribute to the mood of the songs – like how they turn “Ohhh Lover” into something really joyous or “Attraction” into something sensual. How do you choose the samples you use?

TAQ: I just decided to put them on the songs that I liked, I didn’t really care about the mood. I tried sampling for my first time with those two songs, as well as on You R Everything. I’m looking forward to do more sampling in the future.

strong>MBM: You told the blog Simon Says that your idea of a good show “isn’t so much how the artist performs, but how much I am able to be completely absorbed in my own world.” How did you try to bring this ideal to the recording for Blurrywonder?

TAQ: That might be true. Taquwami is pretty much about myself and the way that I enjoy writing songs, and it might be similar in that way.

TAQ: Its just a plain simple room, nothing fashionable. Maybe that blank space is making me imagine of places like haunted mansion or theme park, a place that I cannot really see.

MBM: Do you feel connected to any sort of musical scene in Tokyo, or do you see yourself more as a part of a larger Internet-based community?

TAQ: I don’t really consider myself belonging to Tokyo’s scene – or any scenes in particular. I think it’s more about the Internet. There’s electronic music out there on the Internet that focuses more on beats than chillwave does, and takes its influences from witch house, trap and hip-hop to name a few, I’m talking about artists like Giraffage, XXYYXX, Beat Culture, Selva Oscura and Dose for example. I feel I’m moving in a direction toward them, and from the responses I’ve been getting I think that people also see me starting to be a part of that community.

MBM: You also told Simon Says that if you had to choose a person you admire, it would be Doc Emmett Brown from the Back To The Future movies. This stood out to me because you have a song called “Edo Dream” and you use a lot of samples from the past in your music. How does the past influence your work?

TAQ: Ah! That was supposed to be a joke, it doesn’t really mean anything. I just thought the name Emmett Brown sounded cool. Of course, I am influenced by the past. About 80 percent of the motivation for me to write music comes from nostalgia. But I wouldn’t want to travel back in time because there would be no Internet.