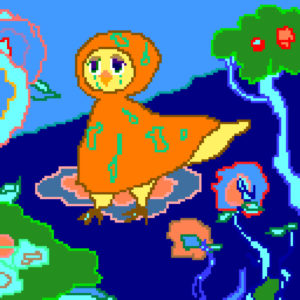 For months, I had no idea where to start with Emamouse. She’s an artist who has been active for over a decade in Japan, but thanks to sites such SoundCloud and Bandcamp has appeared especially prolific in recent years. Just look at her own Bandcamp page, and try picking a single gateway in. Maybe one of my personal fears was highlighting something and then having it get piled up in a deluge of new material — existing English writing on Emamouse kind of just drops in and feels deeply incomplete (the exception: this interview, which is maybe a good starting point). Point is…with every new release she put out, I thought “this is going to be the one!” until I got all nervous and kept putting it off.

Tiny Orange Slicker For Birds seems like a good place to just jump into the deep end. It’s a small but engrossing release showcasing the simple-tools method Emamouse embraces — closest comparison I can think of to an artist that I have written about extensively: i-fls — and how charming it can be. The title track skips ahead as Emamouse weaves together melodies, while the glassy “Fallen Leaves On My House” goes from sparse to chirpy at just the right pace. Both use a spartan set of instruments, but Emamouse squeezes a whimsy from them that finds rich feeling in simple sounds. The bulk of Tiny Orange Slicker For Birds lacks vocals — usually her singing does pop up — but with one exception, on the most downbeat moment, “Lakeside Of Sorrow,” where a simple barrage of “la la las” ups the drama. From here, just jump in. Get it here, or listen below.