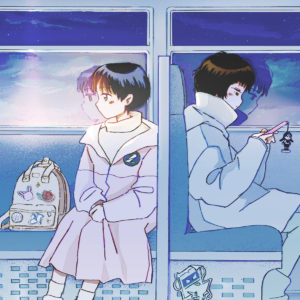 I can earnestly say that, without the internet as it existed in the early 2010s, my life would be completely different. Living in rural Japan, there was a strong but small local community I could rely on, and I’m forever thankful for that, but you also miss out on so much more. Yet back then, the internet felt truly open, full of communities of like-minded people coming together. Which…sure, sounds like today, but rather than gather together to just cloister away and maybe attack the other side, it was a moment where it at least felt like something different was being constructed. An alternative to the monoculture, almost like an alternate musical landscape. Labels like Bunkai-Kei Records, Altema Records, Maltine Records…and let me stop myself here, this spirit (and these labels!) didn’t vanish. Maltine still puts out some of the best music in Japan, and they organize these incredible live shows that, if anything, show that they won — as a friend put it once, the fact that so many people can go from a digital space to a physical club thanks to this netlabel is incredible.

But I’m always thinking about the potential online spaces had back then, when it was really my only keyhole to see something beyond a city home to Japan’s biggest salamander center. And it’s been on my mind this week, with news that club Bullet’s — a space that a professor who studies netlabels once said was the first physical stepping stone for so many of these fledgling digital imprints, that getting a showcase there was massive — plans on closing at the end of March, and because of this song, released via Maltine Records and Zoom Lens.

Let’s not get too goopy — this isn’t simply an ode to a time when the internet was actually a sane place teasing honest-to-goodness advancement. LLLL, Meishi Smile and U-Pistol (Ulzzang Pistol, who also has the project Moon Mask) are reflecting on a deeper connection over the last few years, with help from Calendula who delivers some lovely vocals to the song. The music reflects this, taking elements present in all of their own work and creating something that ebbs and flows between them. And yeah, the lyrics are just as worried about a general passing of time that can’t be tied to a specific non-human place. The players involved in this excel at capturing the melancholy and complexity of life in the 2010s, and this is one heck of a reflection.

But also, I’ve spent all week thinking about it in the context of how I encountered all their music through the internet — and of course Maltine too — and how the feeling of first connecting with all of their music made me feel, and how few internet spaces spark a similar connection (which…maybe I”m just old? Certainly in play). It also helps that, well, the people involved have similar feelings. And this ache persists throughout “Always,” a song wondering what happened to those times and pushing forward. And maybe its very existent is comfort enough. Get it here or listen below (and also…look at all those great remixes! I got so wistful I forgot to talk about those! Just dive in).