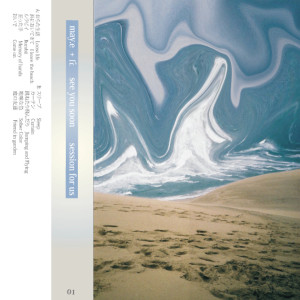 I feel like there are two ways to approach this album, a collaborative effort between the hypnotic singer-songwriter may.e and Oka:

1. The more I listen to may.e’s music, the more I become convinced she’s my favorite artist in Japan at the moment. Nobody else in the country’s music scene does so much with so little as she does, turning acoustic guitar strums and singing into something spellbinding. Like, as a writer, I’ve become afraid of adjectives and metaphors, because they are the go-to attack points for those trying to badger someone who writes about music…and in many cases, very fair targets (what the fuck is a “crunchy guitar sound,” I’m sure I’ve written that dozens of time at some point). But may.e’s songs make me want to empty a whole thesaurus onto this page.

See You Soon Sessions actually offers listeners a chance to hear what may.e’s music would sound like with additional instrumentation. Xylophones and bells and what sound like horns pop up throughout this collection, which features a lot of previously released may.e songs taking on new forms with the addition of Oka. I’m not sure these takes are better or worse than what preceded them, more like looking at them from a new angle. And whatever new sounds sneak into a song such as “Jumping And Flying” doesn’t take away from the number’s real power, which is how may.e’s voice can deliver a rainbow of feeling to a listener regardless if they can understand a word of what she’s saying.

2. Like…I don’t know…maybe someone out there is hesitant of what a performer can do in a studio and/or audio software program, and they listened to may.e’s previous releases and thought “I bet she’s faking this staggering beauty.” I guess this hypothetical person didn’t see this, but whatever. This collection finds her vocals recorded in a rougher, rawer backdrop…like, it sounds constructed in someone’s living room, living up to the Sessions part of the title. And it is still fantastic.

Get it here, or listen to “Sober Color” below.