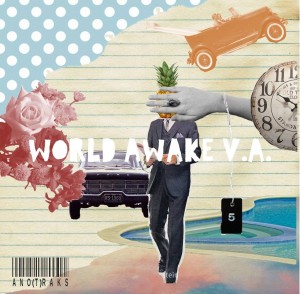 Initially, it looked like netlabel Ano(t)raks was going to define itself as a destination for indie-pop music. Which it still very much does – the bulk of the artists appearing on their compilation albums over the past few months certainly skew towards the twee. Yet with latest various-artists collection World Awake, the fledgling label has established themselves as the go-to source for new, lo-fi artists in Japan today. With this collection…and the not-as-good-in-quality Subterraneans collection…they show they are on top of the introducing you to groups you didn’t know existed before game.

World Awake – featuring fresh-as-heck art from Kai Takahashi, who can seemingly do everything and do it well – features a few familiar faces. Most prominently is Tokyo’s menacing Buddy Girl And Mechanic, responsible for one of 2013’s best albums and the clearest sign Ano(t)raks aren’t just a cutesy bunch of folks. That group’s “Fanaticalia” lurches forward on a melody seemingly borrowed from The Kinks’ “You Really Got Me,” except played in an unsettling fashion. It would feel welcome on Buddy Girl’s self-titled full length from earlier this year, which is high praise around these parts. The Fin., who have appeared on other Ano(t)raks comps, also show up with the bouncy melodrama of “Floating In The Air.” After them…these names are new to us. Annie The Clumsy leads the collection off with the charming “The Gold Crescent,” a muted affair recalling Maia Hirasawa (or the Fiery Furnaces) dwelling on simple observations that come around while walking a dog. Come To My Party make the most out of lo-fi recording on the twinkling “Paraffin Lover,” while Slow Beach throw a slight curve with “Surfin’ Today,” which sounds more like ragtime than surf music. We also dig the atmospheric cut from Ghostlight, which adds in little electronic touches. Know ’em or not, this compilation is packed with good stuff. Get it here, or listen below.