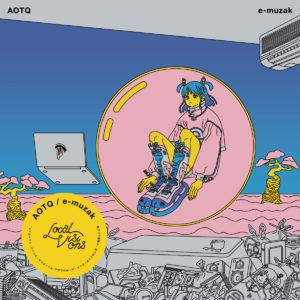 The influence of vaporwave is starting to become clear. The internet-based niche genre of electronic music that turned into a visual aesthetic has recently started being visually adopted by legit mainstream artists in the West, while musically more producers are taking cues from it — or at least being inspired by it. Japan, more so than most places, has been finding intriguing new twists to the style since it started, probably because vaporwave borrowed (and sampled) so heavily from Japanese pop culture and music. Producer AOTQ cites vaporwave and the worldview it creates as a major inspiration in the music they’ve made since 2016, but with E-muzak, they write that they are trying to capture things that niche style just couldn’t. And the end result is a welcome mutation, playing around with the idea of “Muzak” but creating something far more interesting from a sparse selection of sounds.

A preview of sorts of what to expect came last month, via AOTQ’s contribution to the Local Vision’s kick-off compilation. Now, bring the tempo down. E-muzak luxuriates in fat West Coast synthesizer and machine beats, creating these slow-motion numbers that are lava-lamp like…to the point one song here is called “Lava Lamp.” Cuts like “Free Software” and “Air Conditioner” certainly have a all-our-operators-are-busy-please-stand-by vibe to it, but AOTQ creates them using sounds not associated with late-stage capitalism or whatever people say. This isn’t a lame nostalgia honeypot, but a very modern merger of bedroom electronic, funk and certain corners of the web (and, in its focus on sound textures, imagining Cornelius’ Point made for a mall) and featuring moments where the tranquility bends. See the wobbly pace of “Home Escalator” or the little ripples in “Anime Girl” disrupting the fluttery feeling. And the decision to use a different sonic palette gives us something like “Plastic Island,” full of slow-burning warmth that makes the most of its runtime. E-muzak takes ideas inspired by vaporwave but pushes them into something different, with some past touches but firmly pointed forward. Get it here, or listen below.