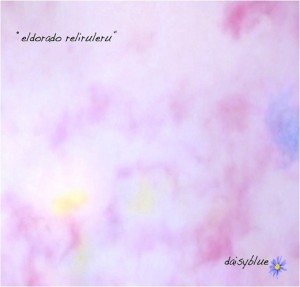 Longtime since hearing from indie-pop project Daisyblue, who return with a new album called Eldorado Reliruleru. The collection is at its strongest with the first two songs, which find Dasyblue plugging away at some tried-and-true formulas. “She Knows” is straight-ahead indie-pop rush, guided by vocals that want to shrink down beneath the song but gather enough courage to come out and some lovely guitar playing. Second track “Don’t Wake Me Up!!!” meanwhile is a twist – guided by rinky-dink keyboard, it turns into a semi-shoegaze hypnotism guided by barely words and a rising swell of noise. The rest of Eldorado Reliruleru is more typical shoegaze/indie-pop, and is alright albeit forgettable. First two songs are worth your time though. Get it here.