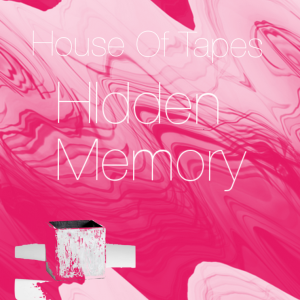 What, exactly, is the end game for an indie producer? Looking at the landscape in Japan in 2014, the answer would be “get the chance to produce for someone else, maybe on a bigger label,” with the ultimate prize being the chance to be turned into a project worth pushing all your own. Nagoya’s House Of Tapes has, for the last few years, been one of the few track makers out there whose music doesn’t seem possible to be mapped on to anyone else – dude made pounding, aggressive dance music aimed at filling every available space on the track with pistoning noise. It did not seem like something anyone could sing over without coming out the other end like grinded-up meat.

Naturally, House Of Tapes’ biggest sonic departure to date somehow finds terrain even less inviting than what he did before…but is great for House Of Tapes himself. Hidden Memory hints at drawing inspiration from the ’90s video game Earthbound (full disclosure: the author’s favorite video game ever, beaten at least 12 times in his lifetime), specifically the final battle against the…bodyless thing Giygas. Hidden Memory, appropriately, is a vaporous collection, the bulk of the EP lacking any driving beat and rather swirling about, the closest House Of Tapes has (might ever?) come to shoegaze. The final two tracks get a bit more pounding, but even then are his most cloud-like to date. It’s a nice switch up, and shows dude’s versatility. Get it here for free.