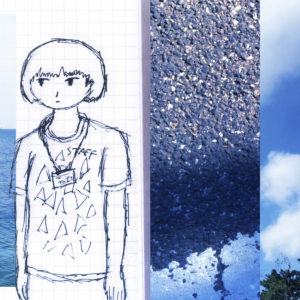 General Overview [Boring, Factual]: i-fls is a producer working out of a suburban commuter community — a “bedtown” — somewhere outside of Tokyo. i-fls creates all of their music using primarily Garageband. Unlike everyone else doing that, i-fls’ music overflows with melancholy, bittersweetness and a nostalgia that isn’t limiting, but like actually trying to remember fragments of the past and failing. Song titles come from common, everyday items or experiences, with a few exceptions. Wasted is i-fls’ latest album, and you should get them all. Wasted is similar to all of i-fls’ other releases, but also it’s own world. It’s great, and if you like simple but affecting electronic numbers with an emotional edge, i-fls is for you.

Longer, Personal [Boring, Earnest]: I don’t think I’ve gone a write-up of an i-fls release without obsessing over the whole “piecing together good memories from the past” part of it…so let’s switch it up a bit. Wasted features so many weird little details, adding further character to track already feeling like they have fully developed personalities. See the warped squealing kicking off the otherwise shimmery bouncer “Private Waster,” the stray drum beats on “Mochizuki Meets Vanishing Point [Bad Mix],” or the various points where it sounds like someone is setting a cassette tape up. Besides being nice touches, they help snap me out of various trances because…Wasted is often so calming! At least compared to so much else out on the internet.

Get me thinking, and part of me reckons that by the end of the decade i-fls will be my personal favorite artist. Partially because few artists can get so much out of so little, but also get so much emotion out of it too. I listen to Wasted, and I just end up reflecting in ways other music rarely gets me to do.