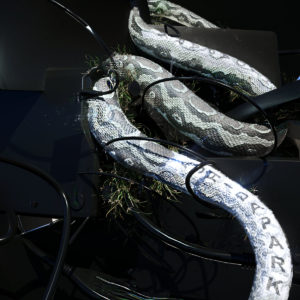 Osaka’s Le Makeup has dropped a few wonderful club mutations in the past few months, but “CNNISSEUR” comes off as the most energetic one next from the emerging producer. It merges a back-and-forth beat…one that manages to slightly unnerving in how it gets punctured by sudden bursts of percussion…with looped rapping, which eventually collapses in on itself and turns into one big, buzzing pile of voices colliding against one another. For as busy as it gets, though, Le Makeup keeps the energy going. It appears on the Alternative Facts compilation, which you can get here. Or listen below.