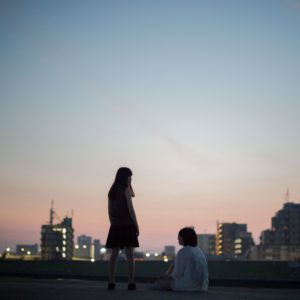 It would be inaccurate to say LLLL’s music has existed entirely in the shadows…the project certainly has spent a fair amount of time in darker terrain, but it has always been good about fitting in moments of escape, using pop as a way to let some light in every once in awhile. Still, “Oshimai Kanashimi” is one of the most outright upbeat songs to emerge from LLLL yet, featuring contributions from Horikoshi Chifumi and Makinoa, and in general sounding like the sun coming out after a big rainstorm. It features a marching beat, and occasionally stops for a second to let some colorful sound enter the frame — samples galore! pitch shifted like cartoons! — and it even ends with a skippy passage. The release comes with a slower take on it via LA’s Meishi Smile (givin’ us Jesse Ruins’ vibes), along with a breezy one from Amunoa. Get it here.

← Seafood Fair: Frasco’s “Imitation Crab” And Fish’s “Bokutachi No Shichigatsu”
In The Blue Shirt Teams Up With Batsu: “With” →