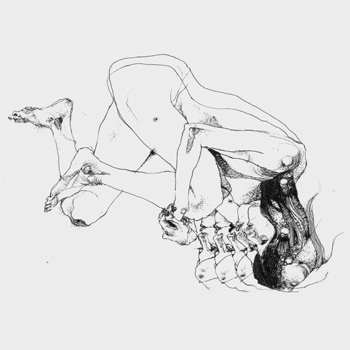 A sense of unease has run through all of LLLL’s music up to this point, the pop-appropriate flourishes of the Tokyo duo’s self-titled debut and the follow-up “Spider Web/Drafting Still” single always undercut by a creeping sense of something lurking in the shadows. Mirror, LLLL’s longest release to date, also happens to be its most dizzying, a mini-album where the strangeness of past releases sounds more linked to the pop than before. The appropriately titled opener “Oddness” establishes the prevailing mood quickly – the intro synths sound like they could have come from a slasher flick, and then more electronics rush into the song. As the song progresses, sound speed up and slow down unpredictably – even the glossy vocals, usually untouched, go through the wormhole. It’s manic and twisty – but also still catchy.

The next song, “I Wish You,” reveals another great duo operating in the same mindset as LLLL. The way the song manipulates the vocals while setting it up against what could be called a dance beat brings to mind Sweden’s The Knife, another group warping electronic-pop music into sinister new shapes. So the rest of Mirror goes – the songs maintain a pop edge but carry a darker tone that lend these tracks extra depth. Get it here, or listen below.