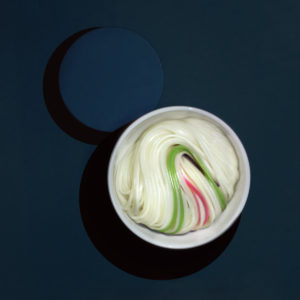 Parkgolf has been exploring what happens when space gets a little more emphasis in a song. This is quite the shift for a producer whose earliest releases excelled because of breakneck pace and maximalist embrace of noise — dude has a song called “Woo Woo” which just captures the energy flowing through his work. But in the last year he’s slowed down a little bit, whether with vocalists or in new age experiments. Sure, he’s still got the wilder side going…but even that is carving out room for a rapper.

Hiyamugi represents the biggest twist yet from Parkgolf. This is a three-song set featuring some of the more spacious music he has made yet. It isn’t minimalist, but there’s a very clear switch-up in sound here. The title track does it best, packing a punch as it jitters between sections — this is the closest I’ve heard any artist come to hitting on the alter-dimension wonder of Moyas since that one dropped — but also leaving room for bird sounds, delicate synth droplets and warped vocals. Here, the “woos” aren’t revving anything up, but puncturing through silence. “Yamori” again works bird chirps into the song, opting for a pleasant skip over anything wild, while closer “Mado” ends this brief run with some strings. Get it here, or listen below.