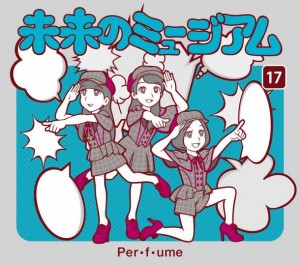 It’s tempting to excuse the relatively lukewarm “Mirai No Museum” because of its commercial obligations. This, maximalist-pop-trio Perfume’s newest single, serves as the theme song for the upcoming Doraemon film which seems to involve some sort of “future museum” (which is what you get when you translate the title). After a string of songs in 2012 that saw the group and producer Yasutaka Nakata continuing to flex their J-Pop brilliance (“Point” and “Hurly Burly” are about as strong a one-two punch I’ve heard in a while), “Mirai No Museum” sounds like a lazy stroll through a museum, bouncy but never really taking any risks save for an occasional Nakata touch lurking in the back. The chorus is something you’d expect from an idol-pop group, not a trio behind killer hooks. It SOUNDS like something made to play harmlessly behind the opening-credit sequence for a movie focused on a robot-cat. I guess we should forgive this single, just because it has commercial interests at heart.

Nope, that’s a cop out, because plenty of other J-Pop artists have taken commercial obligations and created great music out of it. It’s one of the unavoidable aspects of Japan’s pop scene, that many singles are commissioned with commercial use in mind…but that doesn’t mean the music has to be middling. Kaela Kimura’s “Wonder Volt” serves as the theme song for the Japanese version of Frankenweenie, but she used the prompt to create a song that manages to fit the Tim-Burton-made vibe of the film while still sounding daring. Yasutaka Nakata, especially, is good at working within limitations – Kyary Pamyu Pamyu’s “Fashion Monster” was greenlit for a clothing store, but that song stands as one of her best singles yet and her strongest lyrical display. Heck, Perfume have been the masters of delivering great music born out of marketing requests since they got big in 2007. So let’s not excuse “Mirai No Museum” – it’s just sorta lackluster.