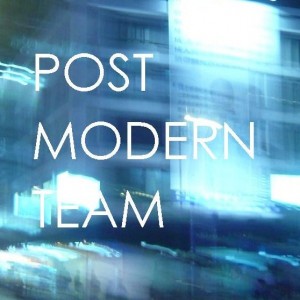 Kansai outfit Post Modern Team’s first song made available to the world’s ears was a little ditty called “Never Let You Down.” It was one of 2012’s finest tracks, a breezy song featuring one of the sweetest hooks to come out of Japan’s indie-pop scene – “never let you down,” they sang, like whispering into a lover’s ear. It was such a sentimental start – and a high peak – that it has gotten hard to remember nearly everything that has come after has bit a lot sadder. Despite sounding upbeat as heck, “Heartbreak” was still about heartbreak, while cuts like “She Does Something To Me” were about unrequited love. Now comes a new EP on Ano(t)raks called Nite Life Lounge, and it might be the outfit’s most bummer-worthy set of songs yet. It also is another example of how good these guys are with just some guitars and drums.

All three tracks here are as simple as everything else Post Modern Team have done before, but they’ve proven that’s not a bad thing and simple repetition can heighten the emotions at stake. The title track sets the scene in a disco, and the main character is having “good times” but something happens where said protagonist needs to make a decision – set against surprisingly dramatic playing from the group. How it ends, we don’t know, but it sure sounds good. The other two songs are a bit more outright about their moods – “Fade Away,” the band’s best stab at shoegaze yet, features the line “thinking about those high school days” and it becomes pretty clear it’s a track about thinking about good times…”before you fade away,” which adds an ominous touch to the song. “Betterdays” is pretty clear from the titles, but the music itself is the closest Post Modern Team come to new sonic territory, as it features a build-up towards something, even if the conclusion isn’t anything huge (plus, the vocals sound like the dude from Built To Spill). Get it here or listen below.