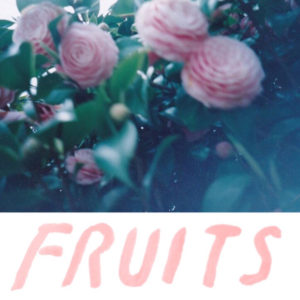 Long-time readers might remember the garage-rock duo Puffyshoes, an outfit I wrote about quite a bit back in the day. The pair made lo-fi, catchy numbers about simple subjects — birthday parties, backstage passes, love — delivered in a high energy style that put that at the forefront of a developing garage scene. Eventually the group went on hiatus, and sort of just vanished.

One half of Puffyshoes, Neko Meows (real name: Azumi Nakajima) is back with a new project, called Fruits, and an eponymous album to kick it off. Fans of her old outfit…or listeners looking for some feedback-slathered rock in an age of pristine band sounds…should rejoice, because Fruits hits on all the same good spots from the get go on opener “Stop Falling In Love With Me,” an indie-pop number run through a blackhole, the sweetness of the melody countered by the fuzz bordering it. From there, she runs through bare-bones reflection (“So Much To Say”) to zippy power pop (“Again #3”). No song goes longer than one minute and 40 seconds, Fruits finding an idea (wanting to be alone with someone on “Alone,” wondering why someone left on “Why”) and getting to the point. It’s a mostly reflective and, frankly, sad, listen, though by the conclusion of “Love On Friday,” a little bit of sunlight enters in. Get it here, or listen below.