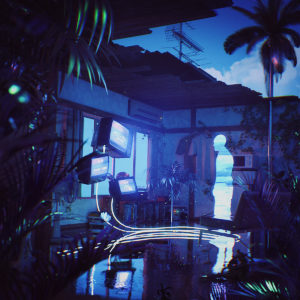 While still quite young, Local Visions has stood out among Japan-based labels in 2018 thanks to one of my personal favorite mish-mashes of recent times. They dabble in the same sound and (sigh) aesthetic of internet niche genres such as vaporwave or future funk, but owing to the fact the bulk of artists thus far to release through them are Japanese, they add some welcome confusion to styles often finding non-Japanese artists pretending to be Japanese for appearances. But now everything gets mixed up, and besides some fun confusion Local Visions’ music offers a new perspective on digital-age sounds. See the charming elevator sounds of E-Muzak or the shimmering midnight delight of Crystal Cola’s L8 Nite TV.

Tenma Tenma’s “Rehearsal” serves as another curveball from the label. After several relatively laid-back offerings, “Rehearsal” jitters along like a bad TV connection. The beat features plenty of bright touches, but it also ripples and twists frequently, giving the song a dizzy feeling that only intensifies when Tenma’s own singing comes in. Digitally manipulated, it moves up and down in pitch and helps disorient the song further. But all of that unstable movement just makes the song more fun, the whole thing feeling like a tipsy dream. It’s another side to a label to keep close tabs on. Get it here, or listen below.